Back in 1957 this Thunderbird was found stolen and abandoned along the Ohio Turnpike near the Lake Erie town of Vermilion, Ohio. The Highway Patrol called a nearby towing service that took it to their storage garage where it sat … for 10 years! The insurance company settled the theft claim in 1957, but the Thunderbird was forgotten, chalking up a legendary storage bill. Discovering that the charges would cost more than it was worth, the 1955 Thunderbird was put up for sale. A local car collector, Tom Mitiska, bought the TBird and would keep it for more than a decade, selling it to Bob Jursinski who only owned it for a few months before it was auctioned to third owner Sam Slack. Years later Sam told Ford salesman and Thunderbird expert Tom Foglyano that the car was for sale. Fortunately, Tom told Barry Penfound of Penfound Design who, with his father Bob, bought the 37,000-mile, original paint two-seater. After detailing, the car would attend many classic car shows, including an invite to the Ford Motor Company 100th Anniversary. As enjoyable as the now 40,000-mile car had become, it seemed like a good time to get the car back on the street and bring some mid-1950s street custom touches to it, while preserving the OEM parts that could return it to its original appearance. 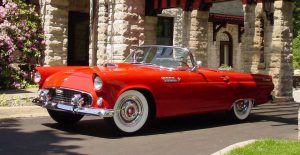 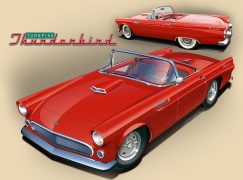 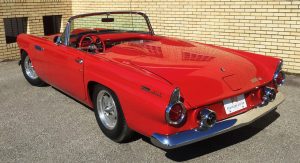 The Turnpike Thunderbird retains its original paint, motor and engine room detail. There are many changes to the car that give it a smooth and clean look. The original whitewall tires and wire wheel hubcaps were replaced with Rocket Igniter wheels and Coker Firestone blackwall bias-ply tires. The suspension was lowered two inches all around with Eaton Detroit springs. A unique grill was made, and the same material was used in the hood scoop, parking lamps covers and backup light shields. Clear headlights were added and 1961 Thunderbird rear lamp lenses were installed. Bumpers from Regal Roadsters were adapted to the TT and rear exhaust outlets were modified to be installed on the rear bumpers. A 1960s-style exterior rear view mirror was fabricated. To clean up the trunk area, a new gas filler door without factory logos replaced the original unit. The Turnpike Thunderbird logo was added to the rear fenders, hood and trunk. Perhaps the most visible change is the new interior trim, starting with a replacement original-style seat. The plaid material is from a 2017 VW Golf GTI, installed by Chuck’s Custom Design. That material continues on to the “fade-away” headrests that bring a sporty feel to the rear deck. A one-off CON2R steering wheel is also featured in the interior plus a Custom Autosound in-dash radio with USB port and custom speakers. ACC custom factory style carpet is also part of the TT interior look.

The car is not a restoration or recreation. It is what 1955 paint, trim and build quality was like as it inched its way down the Ford River Rouge assembly line more than 60 years ago, before it ended up on the side of the road in 1957. 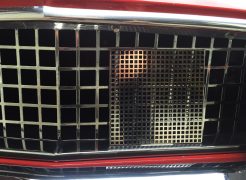 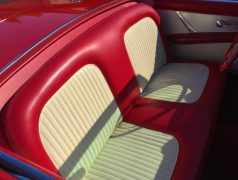 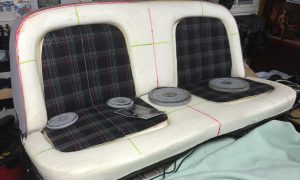 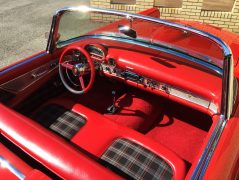 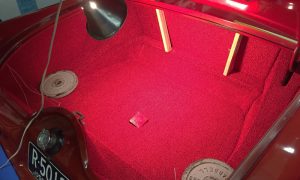 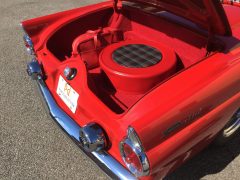 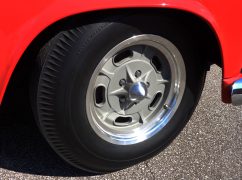 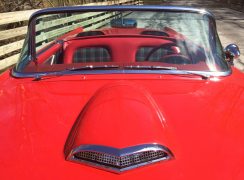 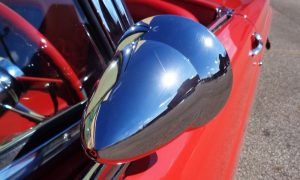 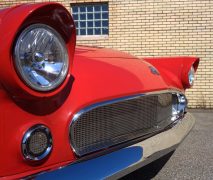 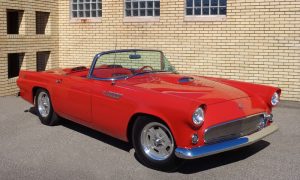