The Scramjet Camaro was invited to be in the Gandrud Chevrolet booth at the National Street Rod Association Nationals August 6-9, 2015, in Louisville, Kentucky, and by all accounts both car and dealer enjoyed the weekend.

As one of the largest Chevrolet Performance dealers in the United States, Wisconsin-based Gandrud Chevrolet, is a regular visitor to the NSRA Nats and the Scramjet Camaro, with its 427 LS7 crate motor was a perfect representative of the kind of performance available from dealers like Gandrud. 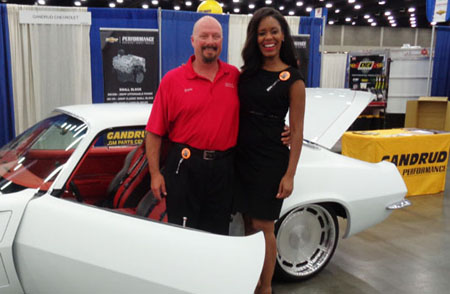 There was lots of attention given to the Scramjet Camaro’s other unique features as well, including the one-off, semi-gloss PPG paint and 19-inch wheels, and its aircraft-inspired interior.

Penfound Design thanks Don Shyrock, Performance Parts Specialist, shown with spokesperson Julie Smith in photo, as well as Chris Slack who coordinated the NSRA visit for the Scramjet Camaro. Gandrud Chevrolet can be reached at 1-800-242-2844. 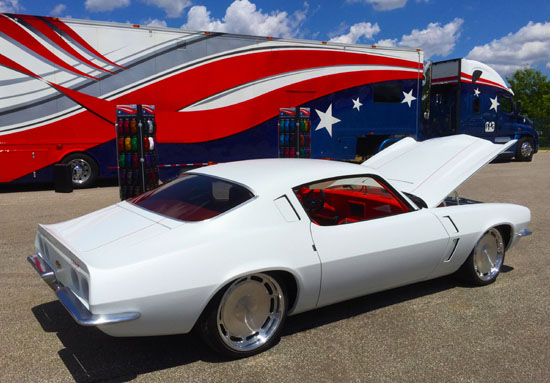 A high quality gathering of collector cars, muscle machines, motorcycles and customs like the Scramjet Camaro were invited to “Come Show Off Your PPG Colors” at the third annual Summer Cruise-in August 1, 2015.

The event, held for the first time at the Strongsville Recreation Center, included free food, lots of giveaway items and a kids coloring book contest among the activities at the show.

A highlight of the visuals at the Summer Cruise-In was the PPG Show Truck, which made a colorful background for the Scramjet Camaro as it won over lots of new fans which included the PPG staff and the general public.

Penfound Design thanks PPG Industries and the City Of Strongsville for the invitation and we look forward to the next PPG Automotive Refinish Summer Cruise-in.

The Penfound Design 1970 Scramjet Camaro visited the Goodguys PPG Nationals July 9-11, 2015, and joined 26 other performance cars as part of the Street Machine Of The Year competition. 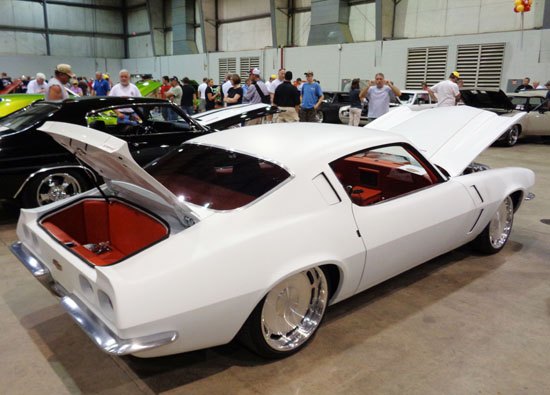 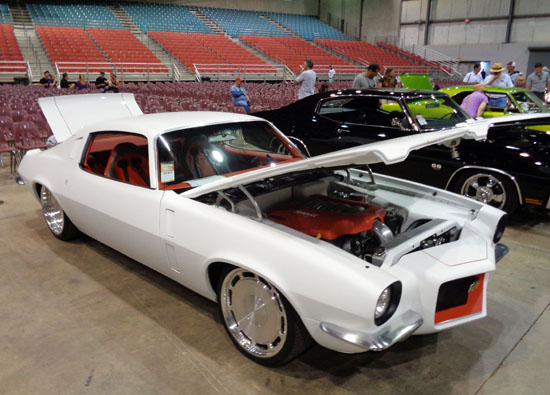 As the King Kong of Goodguys events each year, with upwards of 8,000 cars entered and tens of thousands of spectators, the four-day Nationals brings some of the best street rods, muscle cars and customs together at the Columbus Ohio Fairgrounds. Also in the mix are hundreds of aftermarket performance companies on display and dozens of food merchants as well.

The Street Rod and Street Machine of the Year events are one of the highlights of the Nationals and the cars are displayed in a special indoor location where spectators can get an up close look at car that are reported to cost up to $2 million. Unique to the Street Machine Of The Year segment is that the cars parade through the fairgrounds and then are required to compete in an Autocross to prove that they have the ability to perform and handle in addition to their great looks. The Scramjet completed the four laps of the Autocross and got lots of looks when it returned to the indoor display area, especially when performing its smartphone-operated controls for start and stop, power window and lock function, and headlight/halo tricks.

Thanks to Goodguys and visits from some of Scramjet’s partner/sponsors, including Advanced Plating, PPG Industries, Ride Tech, Chevrolet Performance and Griffin Thermal Products. 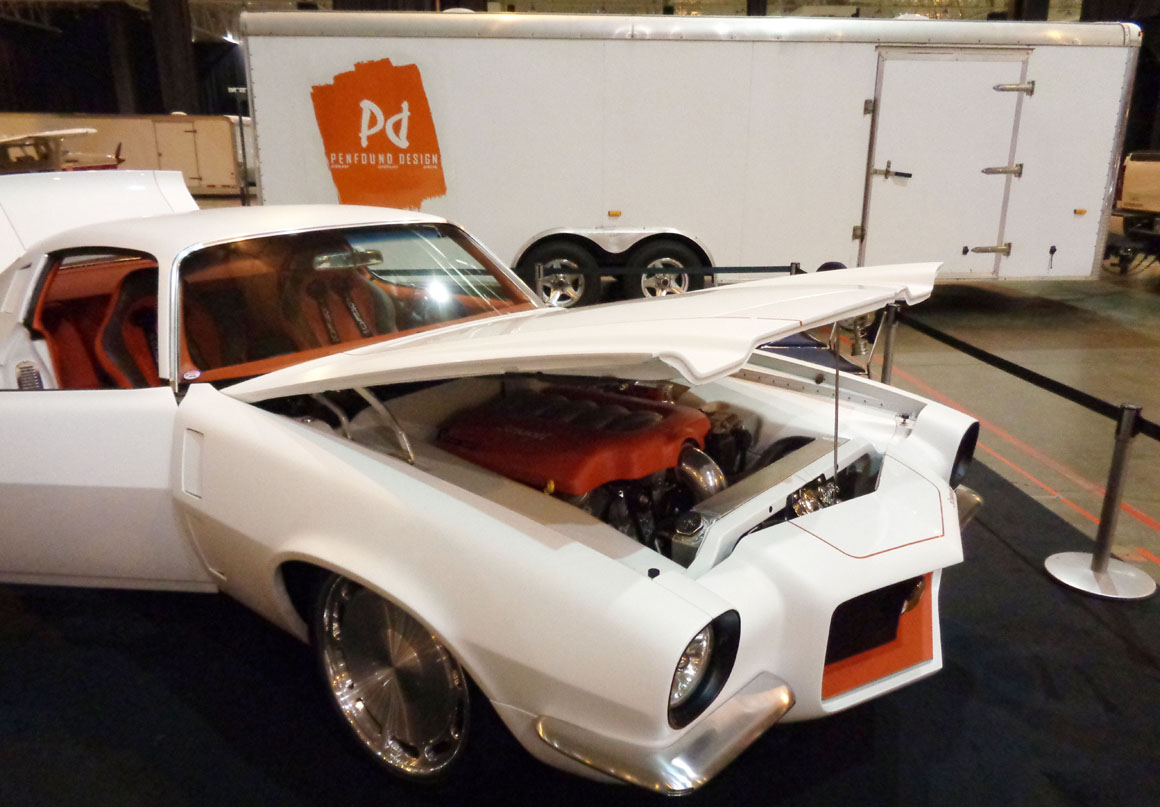 The Scramjet Camaro continued its winning ways at the IX Piston Power Cleveland Autorama in late March by winning a First Place award.

It had already been a ‘winner’ as it was on display in the Cruisin’ Times Top 40 All Stars section of the huge indoor event. Chosen by the magazine’s editor to be in the All Stars area, the Camaro immediately drew attention from the large audience of this growing show.

Since the Camaro’s inspiration is top secret Scramjet planes, which reportedly fly at Mach 5 and are launched and fly in subspace, it was logical that the show be in the backyard of the Cleveland International airport! Power for Scramjet, however, comes from the Chevrolet Performance LS7 427 cubic inch engine with 505 horsepower. The Camaro is raised or lowered through Ride Tech suspension, instead of wings, and 10-inch special wheels on Toyo performance tires makes its ground performance legendary.

Chevrolet 1970 Scramjet Camaro makes its debut at the Detroit Autorama!

Following in the footsteps of every Penfound Design project the 1970 Chevrolet Scramjet Camaro made its debut at the 2015 Detroit Autorama in March.

Scramjet got immediate attention with its special semi-gloss PPG Industries “Mach 4” Intense White paint and one-off Penfound Design/Hot Rods By Boyd 19-inch wheels. Adding to its presence at Detroit was the regular “light and action” shows the car performed through the use of its InfinityBox electronics, Kenwood head unit installed by Classic Revivals, which was responsible for much of the car’s build. The electronics allow the car to be started, windows lowered and raised, lights turned on and off, and the seven functional body vents opened and closed remotely through a smart phone.

The car got great reviews and was especially popular with the hundreds of high school and college students who visited the show. The Corbeau seats upholstered in orange and grey, brought even more attention to the car.

Scramjet received a Second Place award and also was mentioned on several websites, including www.macsmotorcitygarage.com which recognized the car as one of “Nine Noteworthy Cars” at the show and as one of the Top 10 LS powered cars at www.gm-efi.com.

Penfound Design thanks all the folks who made Scramjet possible, including owner Jack Matia, Chuck’s Custom Design for interior and J.D. Spayre for transportation. 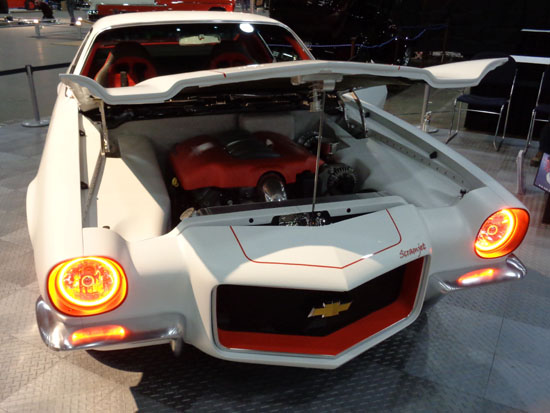 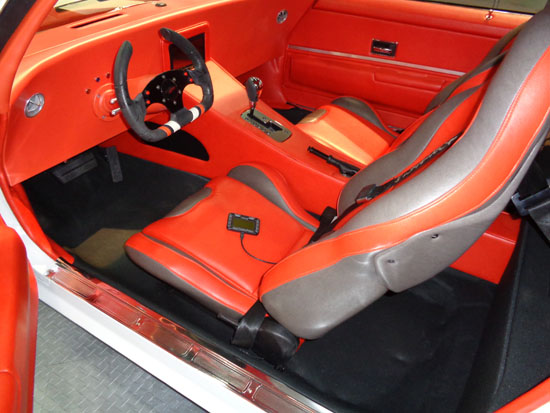 The GTO was given a special honor as it was chosen for a Jegs High Performance mail order catalog cover car. As one of the largest aftermarket performance parts suppliers in the world, Jegs sends out tens of thousands of their catalogs each issue, and has them available in their stores as well. The cars on their covers represent the best in street and race performance and it was special to see the GTO aggressively looking out from the catalog in 2015.

Having the GTO on a Jegs cover continues a PD tradition, since the 1959 Buick LoSabre, and 1963 Chevrolet Impala SportsRoof have also been chosen in the past for a cover appearance, with the SportsRoof getting an additional highlight being printed more than ten feet high on the rear doors of the Jegs show truck.

Thanks again to Jegs.com for their enthusiastic support of Penfound Design projects! 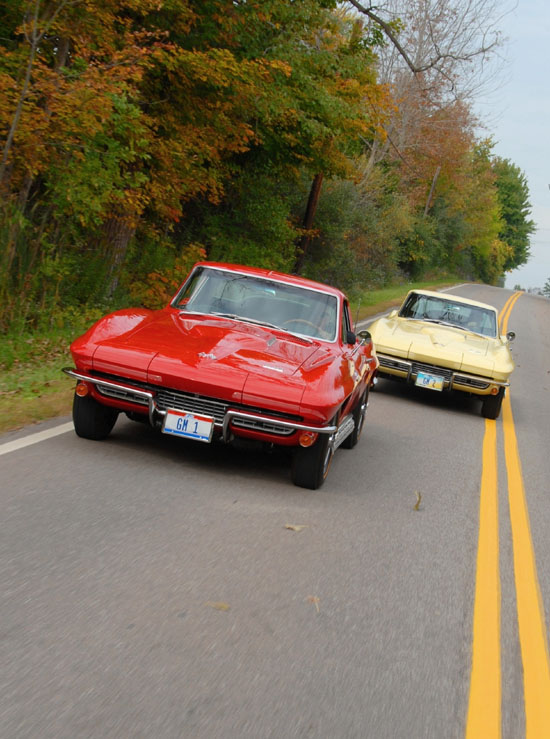 The Corvettes, full on National Corvette Restorers Society (NCRS) projects, were discussed, as well as the PD philosophy of helping create cars that earn special attention in their field of competition.

Restored over a period of several years, the two Corvettes have won many awards and represent the two 427 cubic inch engines offered in the sports car in 1966. “Old Yellow”, the first Corvette coupe to be restored, has the 390-horsepower engine, and its garage-mate, “Big Red”, runs the highest performance engine offered in 1966, the 425 horsepower solid lifter motor. The cars were primarily restored by Classic Revivals, Dave Rieger and his team.

The article, written by Rick Jensen, with from Penfound Design photos, discusses the cars in detail in the four-page story, and also mentions the birth of the custom concept vehicles of Penfound Design.

“… Thanks to Goodguys, SEMA and NSRA shows, the hot-rod and customizing movement was coming back into style. Encouraged, (Penfound) decided to combine his love of cars with his research, marketing, photography and writing skills, and he started Penfound Design in 2001”.

The article is a great look into the legendary mid-year Corvettes, and thanks go to magazine editor Jay Heath for spotlighting the 1966 Corvettes AND Penfound Design.