A park-like setting near Akron, Ohio was home to the 2008 Dropt N Destroyed car show, where scores of mini-trucks, tuners, muscle cars and customs came together in September.

The event brings merchants, DJs, food and lots of style together in one place for car display, music and unique games like auto-limbo where the lowest car to pass under a bar wins. Drop Jaw magazine was also on hand to cover the events.

The Buick LoSabre won Best of Show at Dropt N Destroyed 5 is part of the award ceremonies at the conclusion of the show.Thanks to Aaron and the Dropt crew.

The 1959 Chevrolet Inpala continued its media popularity with a six-page feature, including the centerfold, above, in the September, 2008, issue of Chevy Classics magazine.

“Creating A Custom…Instantly” traces the build of the 1959 mild custom, which took a little more than eight weeks to complete, and discusses the “stock but more” feel of the car which gives it new looks with old school style. “…A lower stance from two-inch shorter front and three-inch lower rear springs, one-piece ‘California’ bumpers with filled bolts and body-matching paint, clear headlights and flat, red plastic taillight lenses (inspired by a ‘how-to’ feature in a 1960 custom magazine), and partially body-colored trim pieces all give the car a “clean and smooth” look without altering the car’s basic structure…” the article explains.

The story also highlights the original paint and “survivor” status of the car that was protected as original pieces were removed and saved as custom components were added. “…The result is a car that has visited a dozen regional and National shows since its completion in mid-2007 and has appeared in magazines and calendars winning over a lot of fans who might not have ever seen or enjoyed it as a stock survivor…”

Thanks to Chevy Classics and Robert Snowden, 1958-1972 editor. Please check out: www.ClassicChevy.com and www.LateGreatChevy.com

Penfound Design got off to a great start in 2008 with a four-page feature story in Rod & Custom magazine.

The article, written and photographed by R&C Technical Editor Kev Elliott, talks about the “instant custom” aspects of the car, and how it came together in just eight weeks. He explained the old-school and new details that were added while maintaining the originality of the paint and trim of the “survivor” 1959 Impala.

“We’ve made a great deal of the stock paint on this car,” Elliott writes, “but it’s the accents that make this hardtop what it is. Painting the headlight bezels and hood eyebrows body color, as well as the one-piece bumpers with hidden bolts, has the dramatic effect of reducing the amount of chrome and stainless over an overly bedecked stocker, while the new grill and perfectly detailed wheels ensure you know it’s not stock, but can’t quite put your finger on why.”

Several other Penfound Design cars were shown in the May 2008 issue, including LoSabre, Cambiar and 1963 Impala SportsRoof (built for Jack Matia), while many of the Inpala support partners were listed as well, including Custom Autosound, Goodyear, CARS Inc., Wheel Vintiques, The Wheelsmith and Chev’s of the 40’s.

Special mention should also be made of Dave Rieger and Classic Revival, who did the paintwork, and Dean Sadowsky, for pinstriping.

Thanks to Kev Elliott, Kevin Lee and Rod & Custom. Please check out: www.rodandcustommagazine.com 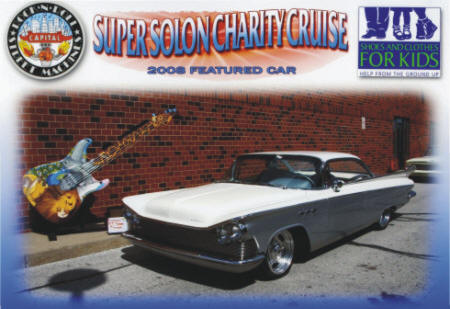 While the Cruise is famous for its Tuesday night events with hundreds of cars on display, there is a one-time charity cruise that is a special party each summer. Designed to highlight the generosity of the people of northern Ohio, parking spaces are sold and donations requested for various charities in the area. 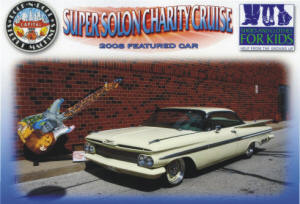 Penfound Design was invited to bring two 1959 customs, the Buick LoSabre and Chevrolet Inpala, for a unique display of the cars in a presentation area.

The event was a success in raising donations, and in bringing nearly 500 cars together for a great show. Thanks to the Rock and Roll Capital Street Machine members for the invitation. 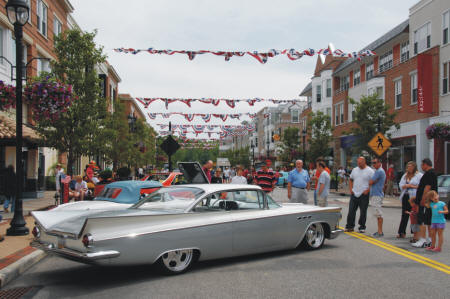 The small town and high style atmosphere of the Crocker Park shopping center in Westlake, Ohio, was a showplace of chrome and colorful paint as hundreds of cars lined its immaculate streets on July 4.

The annual event brought many classics, antiques, and sports cars to Crocker Park, as well as a quality selection of hot rods, customs and special interest vehicles.

Buick LoSabre received one of the Top 3 Judges Picks at the event and was well received by the crowd of car people and shoppers who were attending the patriotic day in Westlake.

With nearly a dozen live bands, a rural fairgrounds location, and a staggering mix of old and new style vehicles, Slamology continued its successful historyin 2008.

In the energetic world of Slamology, the Cadillac Cambiar fit right in, and was awarded a Top 40 Pick as part of the trophy presentation.

While there, Cambiar was also selected to be featured in Gauge online magazine, which later carried more than two dozen photos of the car on its website at www.gaugemagazine.com

It was clear that the Slamology crowd liked Cambiar, and future visits to the event are assured to spread the Penfound Design philosophy in new directions. 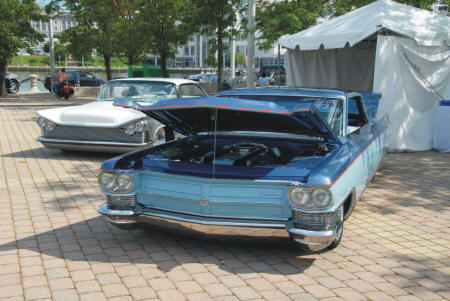 The exciting blend of custom cars, tuners, donks, trucks and motorcycles that is Spinfest returned to to the downtown Cleveland, Ohio, site behind the Rock and Roll Hall of Fame June 14-15.

Penfound Design was invited to the event as a builder and both the Cadillac Cambiar and Buick LoSabre were on display next to the stage and within sight of the Rock and Roll Hall of Fame facility.

A great mix of sounds, style and vehicles, the Spinfest crowd enjoyed LoSabre and Cambiar and their ‘smooth and clean’ look fit in well with the event. As part of the awards ceremony, Cambiar was selected as Most Unique Vehicle and LoSabre was awarded Best Paint at the show.

Thanks to Mike and staff for a great event! 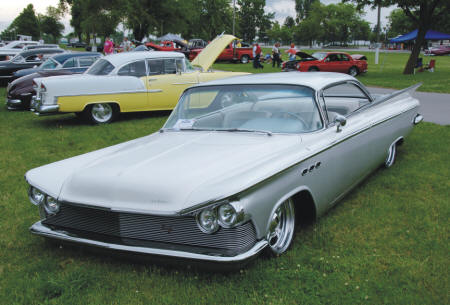 The Kustoms Of America came to the Allen County Fairgrounds in Lima, Ohio, and the Buick LoSabre visited the event for the first time. The result was a Top 25 Pick for the car and a unique old-school experience.

As one of the oldest custom car groups in the Unites States, the Kustoms Of America brings lots of history to its events. The Rod & Custom Nationals was no exception, as hundreds of mostly traditional style customs attended, along with car styling heroes like Gene Winfield who reviewed the cars, signed books and posters and was extremely complimentary to the Penfound Design cars.

It was a great weekend of nostalgia and wheels and a great location in the laid-back atmosphere of Lima, Ohio.