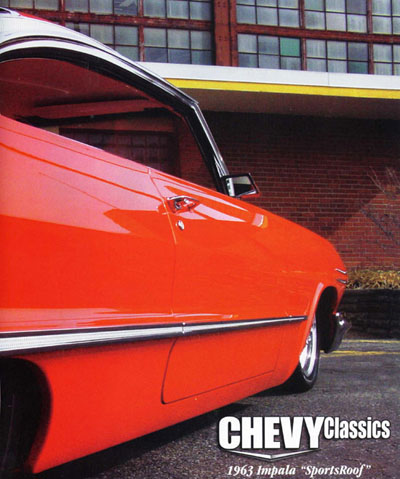 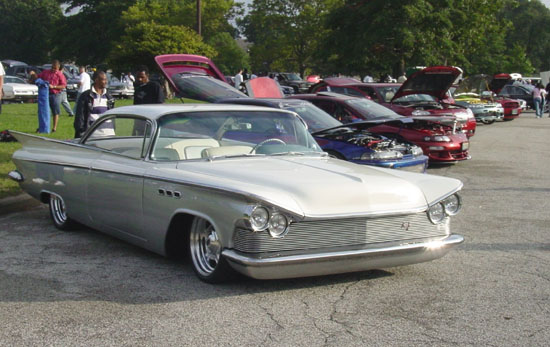 The high energy atmosphere of the Cleveland, Ohio, Spinfest visited Gordon Park with it’s mix of donks, trucks, motorcycles and customs, and the 1959 Buick LoSabre drove into the event in 2007. Following last year’s appearance of the 1964 Cadillac Cambiar, which received “First Place” and “Best Engine” awards, the Buick continued the good feelings.

While the weather was often threatening, the show had a strong turn-out and rows of vehicles lined the park, surrounded by vendors, massive audio systems and a stage on wheels. Hundreds of car owners, friends and neighborhood spectators made the two-day event a special gathering of new and old-school vehicles.

The Buick LoSabre got a lot of attention, and won the Most Unique Vehicle special trophy presented by the show’s organizers. Penfound Design thanks Mike and the rest of the staff for a great day. 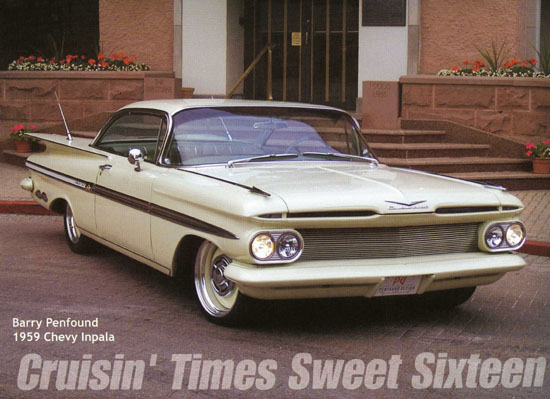 The 1959 Chevrolet mild custom received a special honor by being selected to appear in the Cruisin’ Times magazine 2008 calendar. Distributed throughout Ohio and the Midwest, the calendar features hot rods and customs that editor John Shapiro feels are special cars.

All cars in the calendar were invited to a special cruise-in at the magazine’s editorial offices in Westlake, Ohio, September 2, 2007, along with dozens of other vehicles.

Cruisin’ Times is one of the largest magazines of its kind, which on a monthly basis highlights car shows, cruise-ins, and swap meets locally and throughout Ohio and the Midwest. 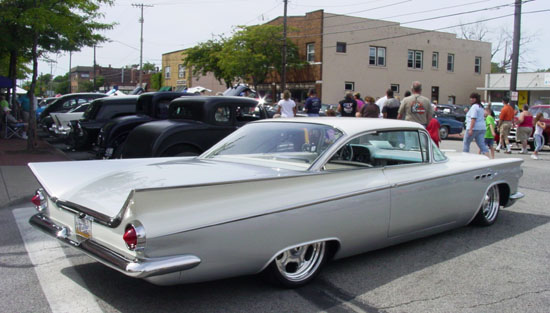 A combination street fair, live concert and 200-plus car show was the environment for the 1959 Buick LoSabre as it dropped in for the annual Lakewood, Ohio, Car Kulture Show. 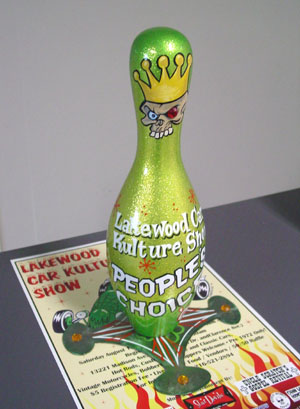 Lining Madison Avenue, the cars included classics, traditional hot rods, customs and muscle cars, mixed in with vendors, food tents and a bandstand for three live acts who appeared throughout the day.

The LoSabre was selected as “People’s Choice” and received one of the coolest trophies around, a metalflake green bowling pin created by Jerry and Joe Koenigsmark and Jerry’s House Of Kolors, Elyria, Ohio.

Penfound Design thanks the show organizers for a great day and great show. 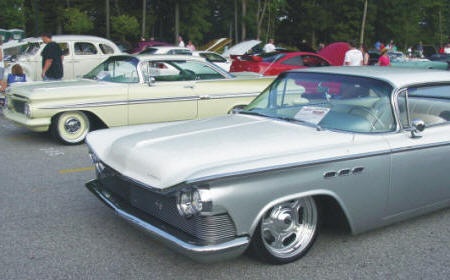 Both the Buick LoSabre and Chevrolet Inpala traveled to Solon, Ohio, for the annual Super Charity Cruise at Solon Commons. Joining about 500 other vehicles at the event. The event features a live band and a DJ, several performance and accessories vendors, and a wide variety of cars and motorcycles that include classics, traditional hot rods, muscle cars and customs like LoSabre and Inpala. 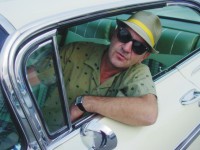 The Solon Charity Cruise also brings a certain sense of style, with spectators and car owners getting into the spirit of the ’50s, and Dave Zima, whose clothes were color-keyed to the ’59 Impala, took a minute to climb in and show what it was like to profile in 1959. 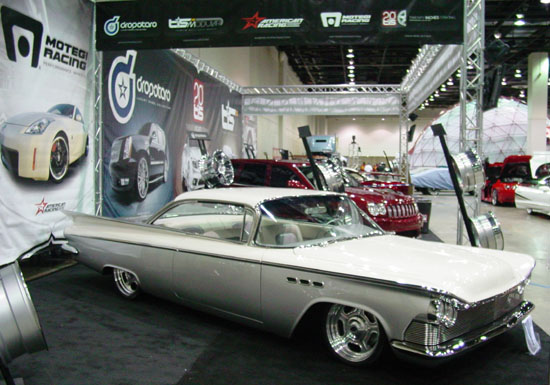 Penfound Design made a return visit to Detroit’s Cobo Hall in early August, as the 1959 Buick LoSabre made a trip to the Dub Magazine Tour Stop, following 2005’s “Best Of Show” appearance by the 1964 Cadillac Cambiar.

The Buick was invited to be a part of the American Racing Equipment display, and was one of four cars featured in the exhibit of wheels that include American Racing, Weld Racing, Boyd Coddington, TIS, Dropstars, Ro Ja and Motegi Racing wheels.

The LoSabre features 18″ and 20″ Boyd Coddington Classic wheels, which brings a combination of traditional appearance and modern wheel size and stance to the mild custom Buick.

Thanks to Phil Perez and the rest of the American Racing Equipment team for making the visit a successful one. 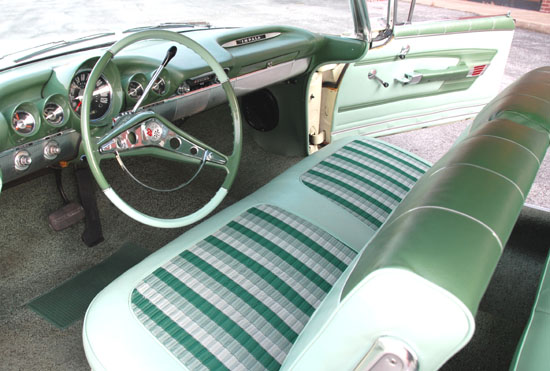 Surrounded by scores of other bowtie products, the 1959 Inpala made an appearance at the Summit Racing All Chevy Show, at the company’s headquarters facility in Tallmadge, Ohio. The unique “bat-wing” styling of the ’59, combined with the custom updates, resulted in a TOP 25 Pick at the show, and lots of attention from visitors and Summit employees who checked out the cars.

A great summer day, and a smooth and well-coordinated show by Summit staff members like Jim Grosso, made the All Chevy Show a great experience. 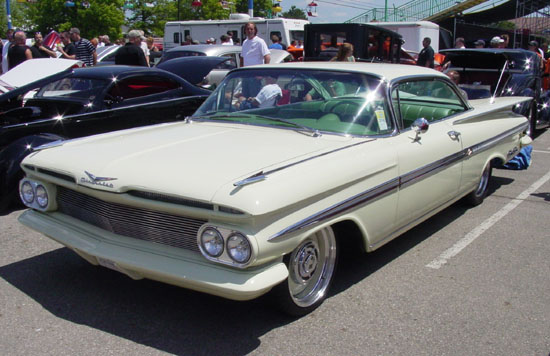 With thousands of cars on hand, and some great mid-summer weather, the 1959 Chevrolet “Inpala” had a great time cruising the streets of Columbus and visiting the 10th Goodguys PPG Nationals. The car, which combines mild custom touches from the 1950s and 1960s with wheels, tires and other contemporary features from today, got lots of attention. More details of its Columbus appearance will be coming in the near future.

While in Columbus, the Inpala spent time at Grange Insurance headquarters, and Penfound Design thanks the company for its continued support of the the team and cars. Among other companies offering support for PD projects in Columbus are: PPG Industries, Air Ride Technologies, Goodyear, Flaming River Industries, Custom Autosound and Classic Revivals. 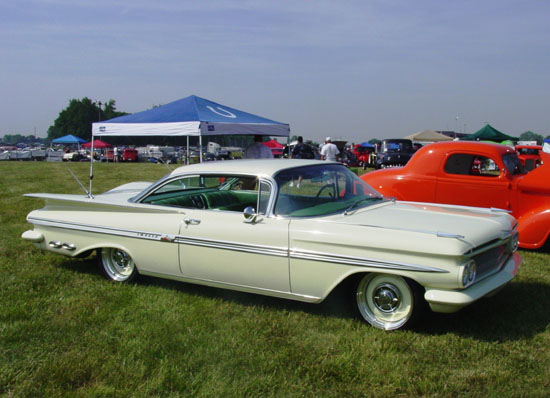 Looking like an updated version of a car that might have visited the National Trail strip when it opened in 1965, the Inpala brought back lots of memories for both spectators and racers at the event.

The 1963 Impala Sportsroof was honored to be a cover catalog subject for the latest issue of the Jegs Performance catalog, but it moved to the next level by being featured on the rear of the racecar transporter for the company. Penfound Design has also learned that the Buick Losabre cover image from 2006, is also featured in the Jegs headquarters showroom.

Thanks, Jegs, for making Penfound Design a part of your world … 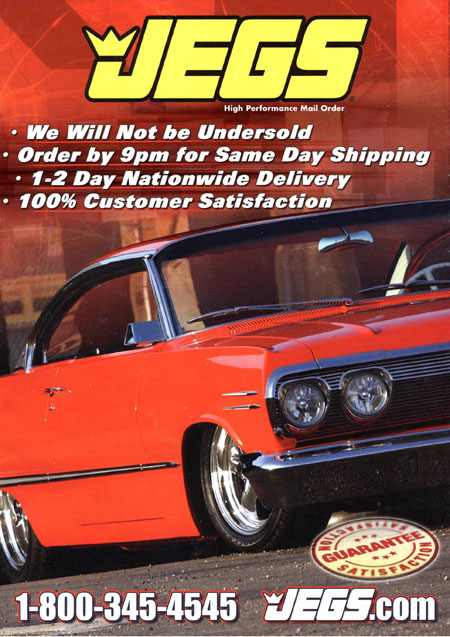 The 1959 Impala “instant custom” moved to its second outdoor show at the Goodguys Hot Rod Nationals in Indianapolis June 7-10. With some of the most radical hot rods and customs in the country in the Pro’s Pick area, Inpala got lots of attention with its stance, original paint, and 18″ color-keyed wheels.

Since the car is a true driver, it got plenty of street time in Indianapolis, and visited the Friday night parking lot party at the Adam’s Mark Hotel. Lots of folks enjoyed the radical factory styling of the Impala and the changes to the grill, bumpers, lights, valances and trim helped take the car to the next level.

Inpala is living up to its design objective, mixing in new elements of 18″ wheels and one-off modern components with the look of the mild customs of the late 1950s and early 1960s where owners would buy a new car, take them directly to their local custom shop and get them back on the street quickly for serious street cruising. 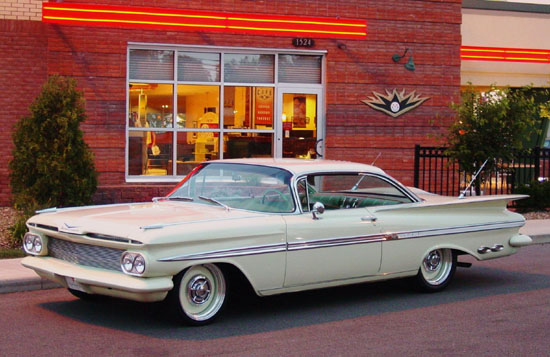 Sharing space with more than 4,000 other cars, the 1959 Impala custom made its first appearance at Cleveland’s IX Center June 2, 2007 … and to prove it’s a “real world” car, it took part in the first leg of the tour to Kalamazoo, Michigan.

The inspiration for Inpala was born in the “little book” 1950’s and 1960’s custom car magazines which featured brand new cars being taken to local body shops for custom updates to get them back on the streets as quickly as possible. Some owners of new Impalas, LeSabres and Thunderbirds drove them directly from the dealer lot to change grills, lights, wheels and tires. They ended up with INSTANT customs.

Since Inpala is based on an original paint survivor hardtop, the idea was to make the car as smooth and clean as possible, while maintaining its OEM status. The result is a car with elements from the past and today. The one-off stainless 17-bar grill introduces the Inpala, along with body-colored, one-piece “California” bumper with bolts filled, painted upper grill vents, and partially painted headlight bezels with clear headlight lenses. At the rear the look includes a body-colored bumper, with backup lamps removed from the lower valance, one-off red plexiglass taillights and paint-accented bezels.

Stance is important to Inpala and it accomplishes its look with two-inch lower front and three-inch lower rear springs. The wheels are unique to the car, being 18-inch solid billet wheels with color-keyed centers and specially-adapted New Old Stock center caps. Tires are Goodyear Eagle F1 GS-D3s.

Penfound Design thanks everyone involved in making Inpala a fun and cool project. It will attend Goodguys, Super Chevy and other events including the NHRA Hot Rod Reunion. Look for it this summer.

Impala SportsRoof Draws a Crowd Under the Lights of Las Vegas 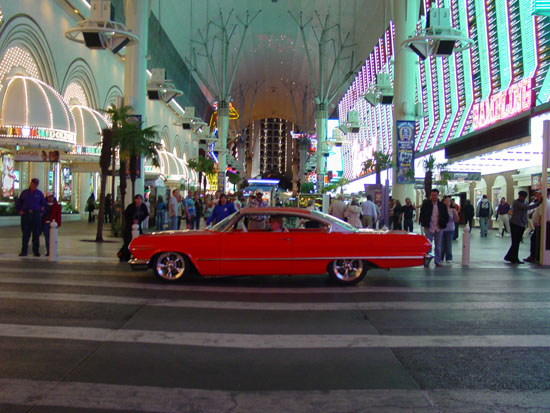 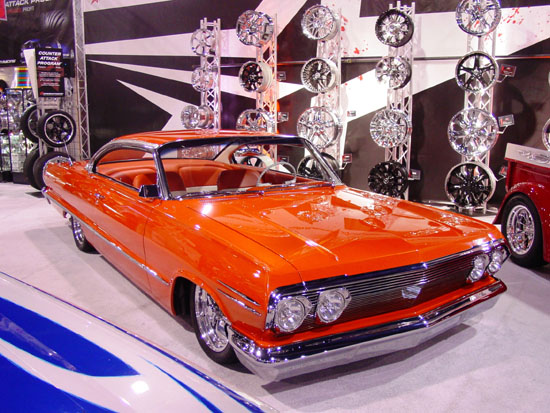 The 1963 Chevrolet Impala SportsRoof received a special honor by being invited to the SEMA show in Las Vegas in November as part of the American Racing Equipment, Inc., display. The hits continued for the car as it was then moved to the NHRA Wally Parks Motorsports Museum in Pomona, California for the balance of 2006.

Fresh from a summer of Goodguys and Super Chevy appearances, the Impala, owned by Elyria, Ohio, Chevrolet dealer Jack Matia, made the cross-country trip to the massive Las Vegas Convention Center. Arguably the biggest and most diverse car show on the planet, the Specialty Equipment Market Association (www.sema.org) show brought more than 2700 vendors and 150,000 people to the 3.2 million square foot facility. This combination of hot rods, new production cars, sport trucks, tuner cars and customs was a great place for the Impala, and it gained several new friends at the event. 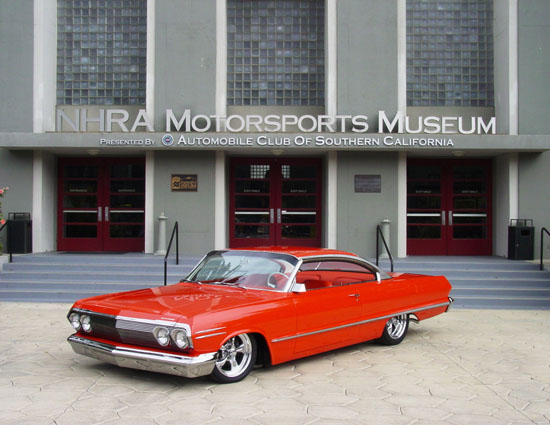 At the conclusion of the SEMA show, the Impala cruised the streets of Las Vegas, checked in at a custom car show at the Hard Rock Cafe and then, with help from Transportation Director Jeff Miller, his wife, Toni, and John DiBartolo, the Impala journeyed to Pomona to the museum display. Surrounded by some of the great hot rods, customs and race cars of the 1950’s and 1960’s, the Impala was put into a special 50th Anniversary display for American Racing Equipment, (www.americanracing.com) parked next to the original Steve Stanford drawing which inspired the building of the car. Museum staff Tony Thacker, Greg Sharp and Wayne Phillips all helped make the move a smooth one. The car will be on display through the end of 2006, and the museum is open to the public (www.nhra.com).

It was all a continuation of an amazing 2006 for the Impala ‘SportsRoof’ … more news will follow!