The 1964 Pontiac Sabertooth GTO has received several awards and has been featured on magazine covers, but perhaps its most high visibility moment so far is in a PPG Industries poster honoring the 50th anniversary of the GTO.

Sent to many of the PPG Industries, Inc., retailers in the US and around the world in late summer of 2014, the poster highlights the one-off PPGTO Blue paint (code 939558) while “celebrating five decades of GTO History”.

With a bold headline “50 Years Later It’s Still Ahead Of Its Time.” the Sabertooth GTO is shown in an industrial-looking setting (the location was the produce elevator towers in Grafton, Ohio).

Penfound Design thanks PPG Industries for the recognition and its continuing relationship with the dominant paint supplier in the rod and custom, and production car, world.

A Return to the Summit Pontiac Nationals 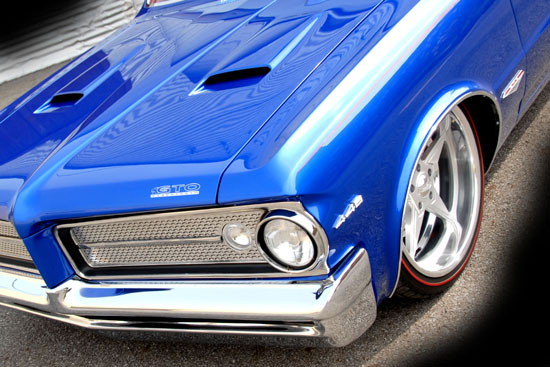 As one of the largest all-Pontiac shows in the United States, the 23rd Ames Performance Pontiac Natiionals, August 1-3, 2014, was a great chance for the Sabertooth GTO to visit some of the finest restored and modified Pontiacs in the country.

Since it is held at the Summit Motorsports Park in Norwalk, Ohio, one of the nices race facilities in America, it made a visit especially rewarding.

A unique part of the 2014 event was a special parking area for 1964 GTOs, and the Sabertooth got lots of attention as it sat among other modified and meticulously restored original versions of what is one of the first, if not the first, muscle car of the modern era.

The Sabertooth was selected for recognition at the event, but perhaps its best moment was when a young girl watched the car drive by and yelled: “There goes Sabertooth!”. That was as special as any award! 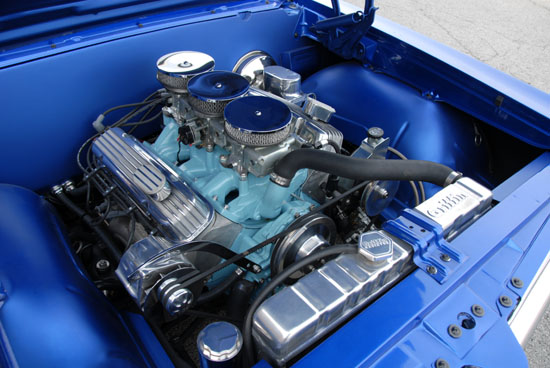 As the largest hot rod, muscle machine and custom car show in the Eastern half of the United States, the Syracuse Nationals has a well-earned reputation as a major deal, with food, vendors and some of the most amazing machinery to be assembled anywhere.

It was the first visit by a Penfound Design concept custom to the New York show, held at the Syracuse fairgrounds, and the thousands of cars, mixed in with a huge crowd of spectators, made it a sight to see.

A highlight of the event is the selection of competitors in the Designer Dozen competition and the GTO was selected as one of the nominees.

The area around Syracuse is filled with street driving and makeshift mini car shows in hotel and restaurant parking lots each night, and the Sabertooth GTO joined in the evening events as well.

The July 18-20, 2014 event was presented by the Right Coast Association and based on the number of cars and people at the event, it will be a part of the modified car world for a long time. 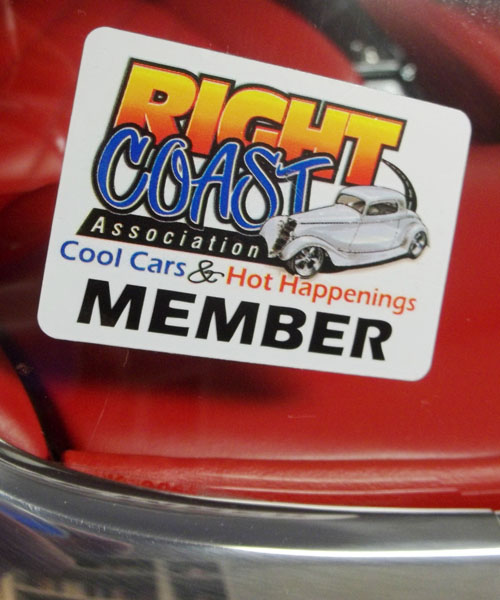 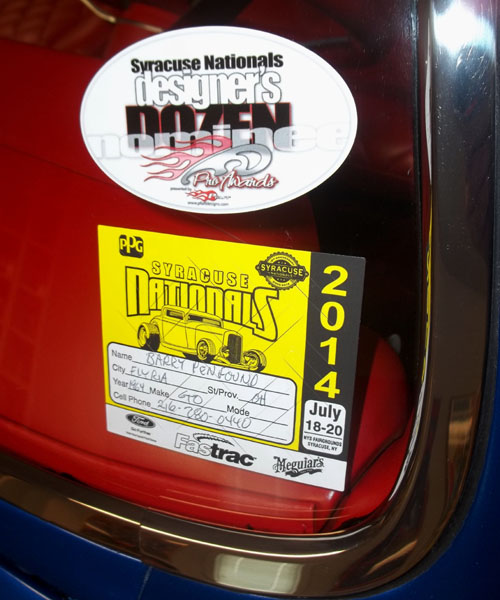 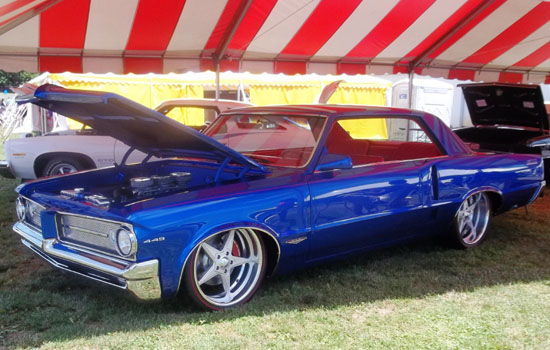 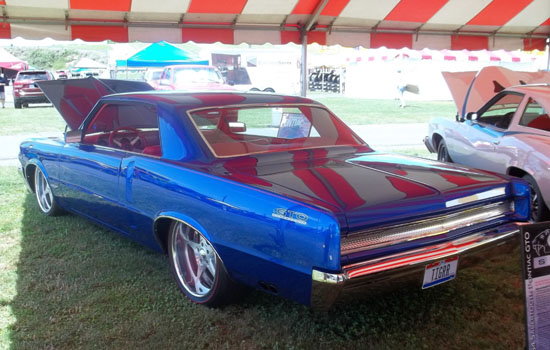 As part of the 50th anniversary of the Pontiac GTO at the GM Nationals in Carlisle, Pennsylvania, June 20-22, 2014, the Sabertooth GTO was invited to attend this prestigious show.

High Performance Pontiac magazine had a special tent at the event, and there were several special GTOs on hand to mark this half century anniversary, including rare race cars and special show vehicles. It was especially interesting to see a perfectly restored 1964 GTO stock convertible parked only a few feet away from the Sabertooth GTO which showed the differences between a production car and a concept custom.

The dozens of 1964 GTOs were the highlight of the GM Nationals, but they were only part of this three day General Motors festival. An array of Camaros, 442s, Chevelles and classic GM trucks were parked on the green lawns of the fairgrounds, and there were technical show-and-tell lectures, live music, lots of merchants and a car corral with many historic GM cars for sale.

Thanks to the Carlisle Events staff for making the Sabertooth GTO feel at home. 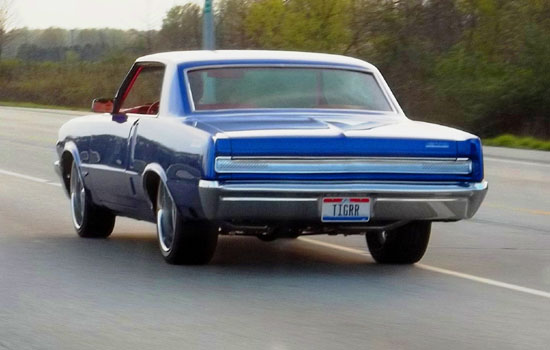 It was a rainy day as the Hot Rod Power Tour made a stop at the Summit Raceway Park in Norwalk, Ohio, June 10, 2014, but as the sun made a brief appearance the Sabertooth GTO made a quick drive to the show.

The traveling road circus that is part of the excitement of the Hot Rod Power Tour includes performance parts merchants, special presentations of historic and current race cars, and a chance for tour drivers to cruise around the race facility, participate in autorcross and drag racing, and show off their cars in an intense, high octane environment.

The Sabertooth GTO got a lot of attention, and it continued to spread the word of the GTO 50th anniversary to the northern Ohio crowd that attended the event.

The Hot Rod Power Tour moved on the Crown Point, Indiana, on July 11, and the GTO drove into the sunset back to the Penfound Design garages. 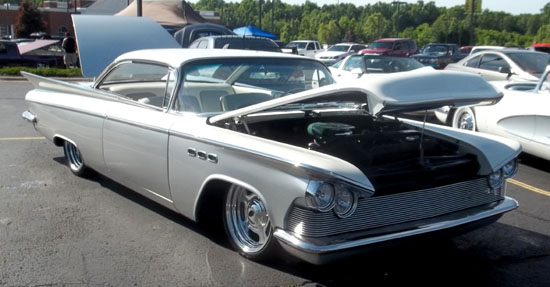 Layin’ Low In Ohio, a car club featuring pavement hugging trucks, cars and motorcycles, held an event June 7, 2014, at the Quaker Steak and Lube restaurant in Sheffield, Ohio, and the 1959 Buick LoSabre proved it could hold its own.

Winning both the Lowlyfe Best Of Show and Club Pick at the event, LoSabre was a crowd and club member favorite and showed the crossover ability of Penfound Design cars that can have fun and custom, classic and special interest shows like the Layin’ Low in Ohio gathering. LoSabre thanks Layin’ Low in Ohio and its club members for welcoming the Buick to its show.

There are dozens of great cruise-in events near Penfound Design and one of the best is the Cuyahoga Falls, Ohio, event held on the streets of the town each week.

Several of the PD cars have visited the show, but at the first time showing of the Sabertooth GTO May 26, 2014, it received some special attention. While it got its share of looks, the GTO was also selected to be featured in a 2015 calendar featuring classic, muscle and sports cars. The calendar was distributed to businesses, homes and car collectors to help promote the cruise-in and feature the high quality vehicles that regularly attend the show.

Thanks to the staff at the Cuyahoga Falls cruise, photographer Todd Liebanauer, and sponsors Clifford-Shoemaker Funeral Home/Crematory. 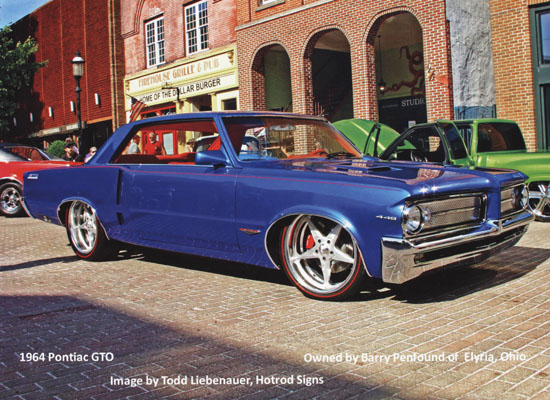 Sabertooth GTO is featured in a 2015 calendar 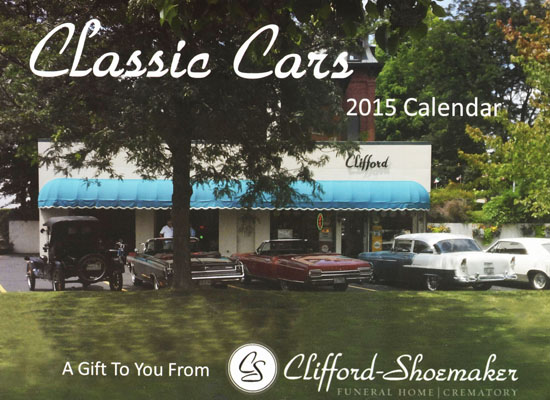