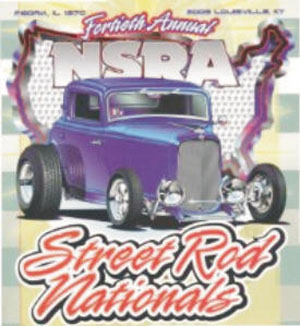 Penfound Design was given a special honor by being selected to show a vehicle at the 40th Annual NSRA Nationals in Louisville, Kentucky, August 6-9, 2009. A special feature added to the NSRA Street Rod Nationals in 2006, the Builders’ Showcase is a “one-of-a-kind display of vehicles by street rodding’s elite professional builders,” according to the NSRA description of the event. Held in the South Wing lobbies of the Kentucky Exposition Center, the cars were on display all four days of the prestigious Nationals, which brings thousands of cars, and hundreds of commercial exhibitors to Louisville each year.

“The National Street Rod Association is excited to be able to bring these works of automotive art to the Street Rod Nationals for the fourth year in a row so thousands of enthusiasts from around the world will be able to appreciate the workmanship and creativity of their builders.

This activity is another highlight of street rodding’s most significant event of the year.” Thanks to everyone at the National Street Rod Association.

To learn more about the NSRA and its events, visit: www.nsra-usa.com

It makes perfect sense that the Sabertooth GTO motor would make its debut in a national magazine before the car…because the engine is the heart of the beast. The 449 cubic inch motor with 507 horsepower and 528 lb-ft of torque, might owe its heritage to Pontiac, but it got its muscle through the partner companies which made it happen. High Performance Pontiac did an in depth, six page story of the motor build in the July, 2009, issue of the magazine. “When it came time for Barry Penfound, of Penfound Design, to choose a power plant for ‘Sabertooth’, his ’64 Pro-Touring GTO project, he didn’t have to look any further than the engine bay. You guessed it- the original 389 was still there,” Don Keefe explained in his story, which had photos and contributions from HPP editor Thomas A. DeMauro.

“To marry vintage flavor to modern technology and increase power at the same time, Barry turned to Bryan Weber of Weber Racing Equipment in North Ridgeville, Ohio, who formed a plan that put the goals with practical reach, and his dad, Dave, assembled the engine,” Keefe wrote. The August issue of High Performance Pontiac saw the motor move on to the dyno to find out if it would make the kind of horsepower worthy of a GTO tiger…

“While at Weber Racing, it became a 449 ci, Edelbrock-headed beast that was topped off with one of the Barry Grant Six-Shooter setups, which offers a modern approach to the Tri-Power systems we are now so familiar with,” Keefe writes. “The end result was an engine that was substantially larger in cubic inches and more powerful and lighter than the original 389, all positive attributes to have in a performance-oriented Pro-Touring machine.” The results, on the dyno at Michael’s Racing Engines in Macedonia, Ohio, were spectacular. “After multiple pulls and backup pulls (which include timing and jet changes), it was determined that the second was the best. The 21st Century Tri-Power laid down a corrected best of 507.6 hp at 5,700 rpm, with 528.3 lb-ft of torque at 4,400 rpm.”

Penfound Design thanks Bryan and Dave Weber of Weber Racing, Michael Tietro of Michael’s Racing Engines, Ken Wilhelm of Ken’s Performance, and Jeff Gulley for all the help with the engine build and testing.

Thanks to High Performance Pontiac! Please visit them at www.highperformancepontiac.com