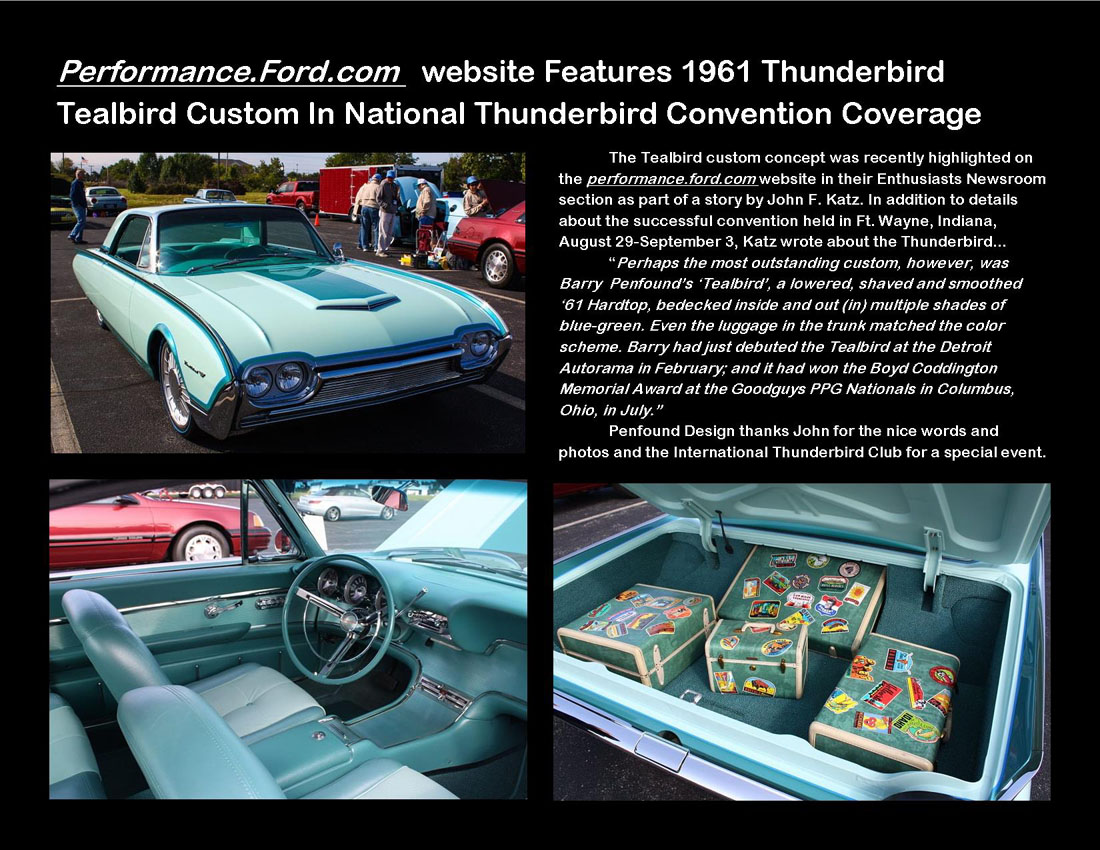 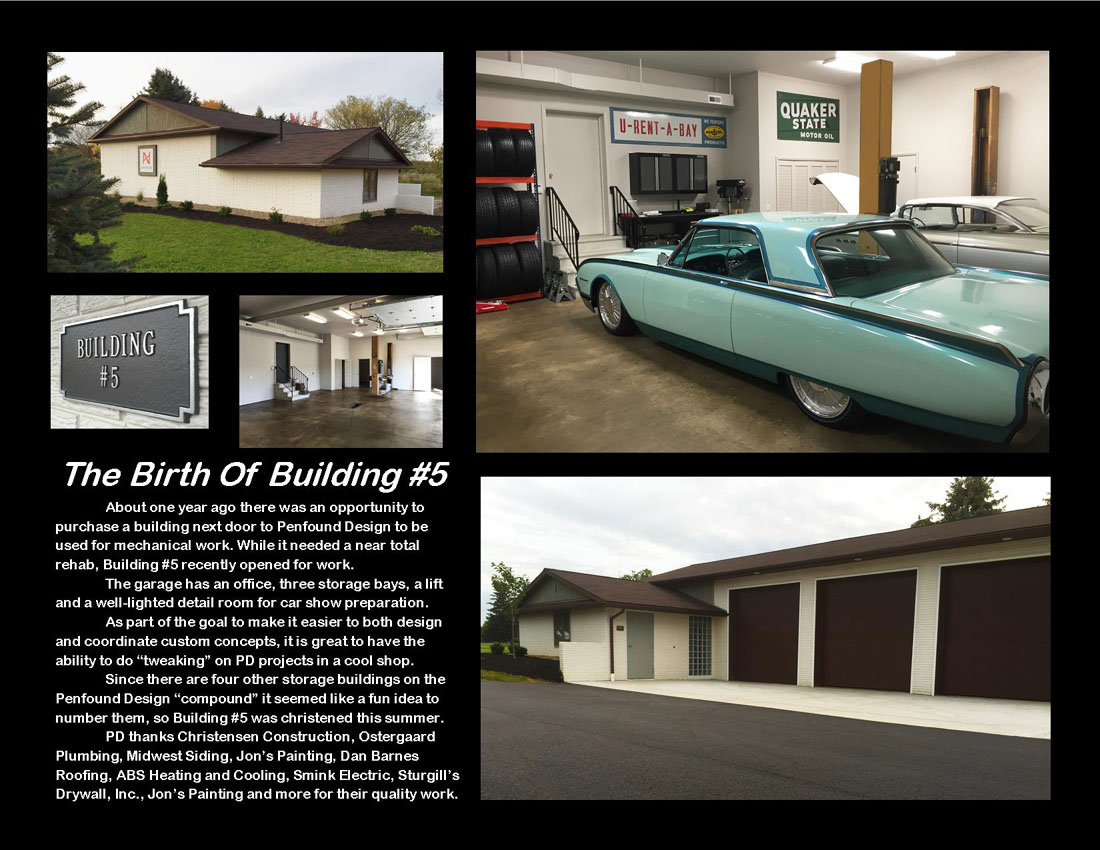 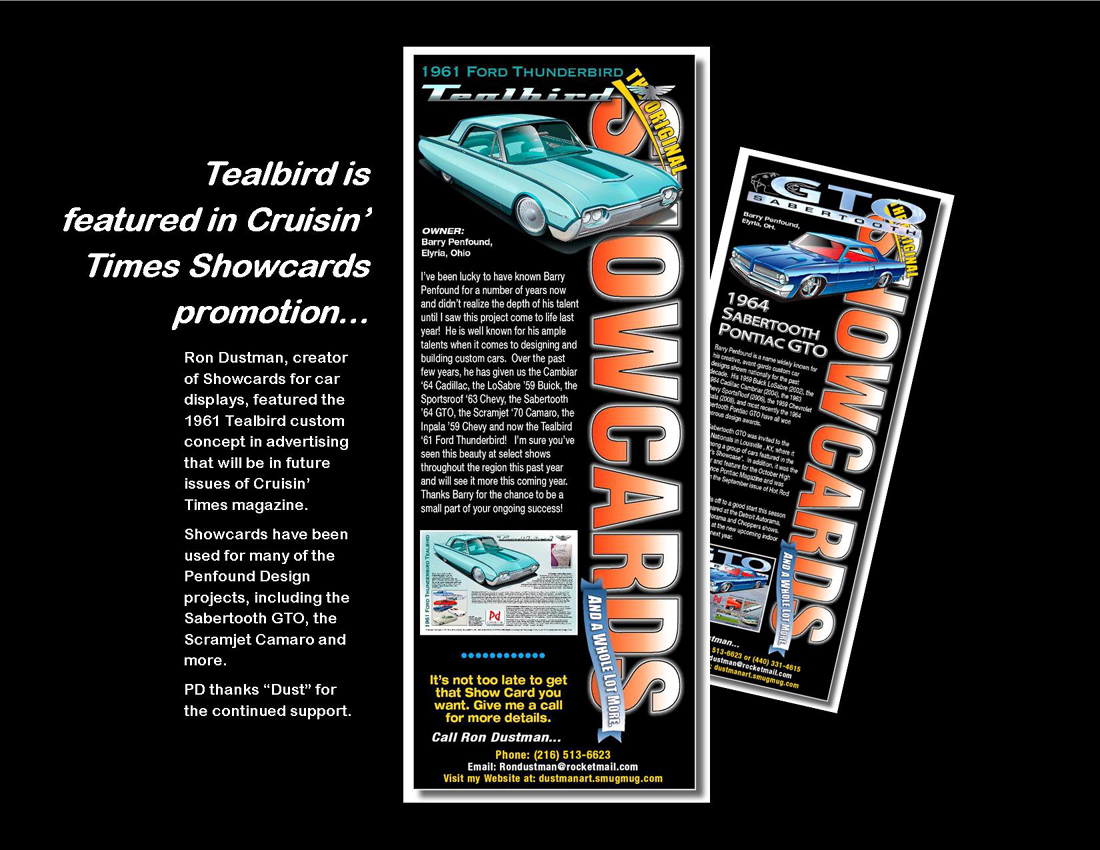 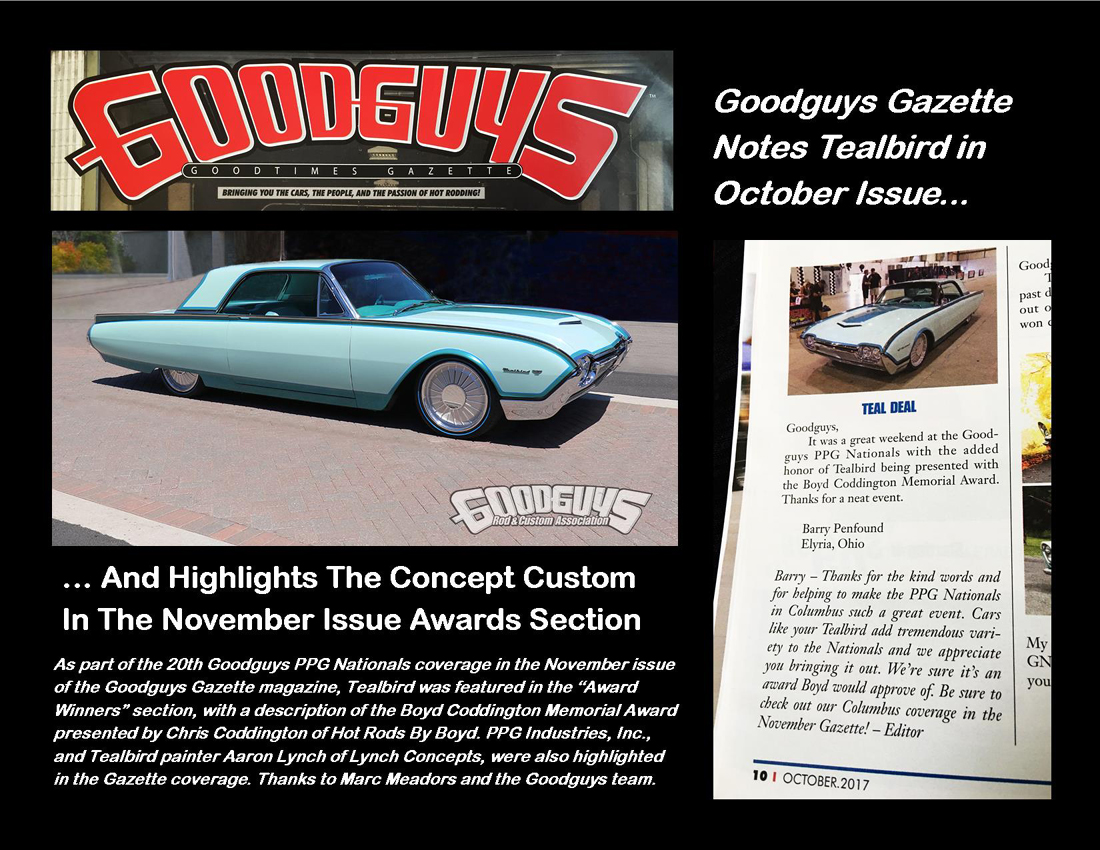 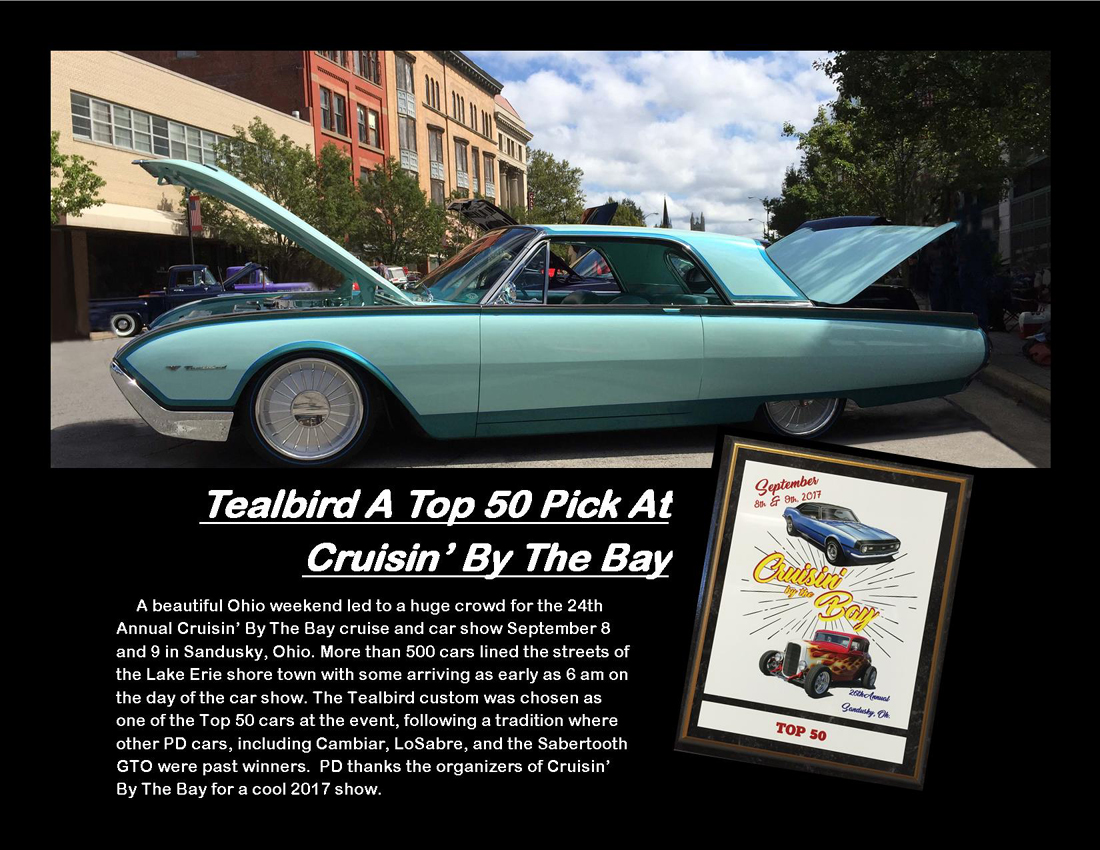 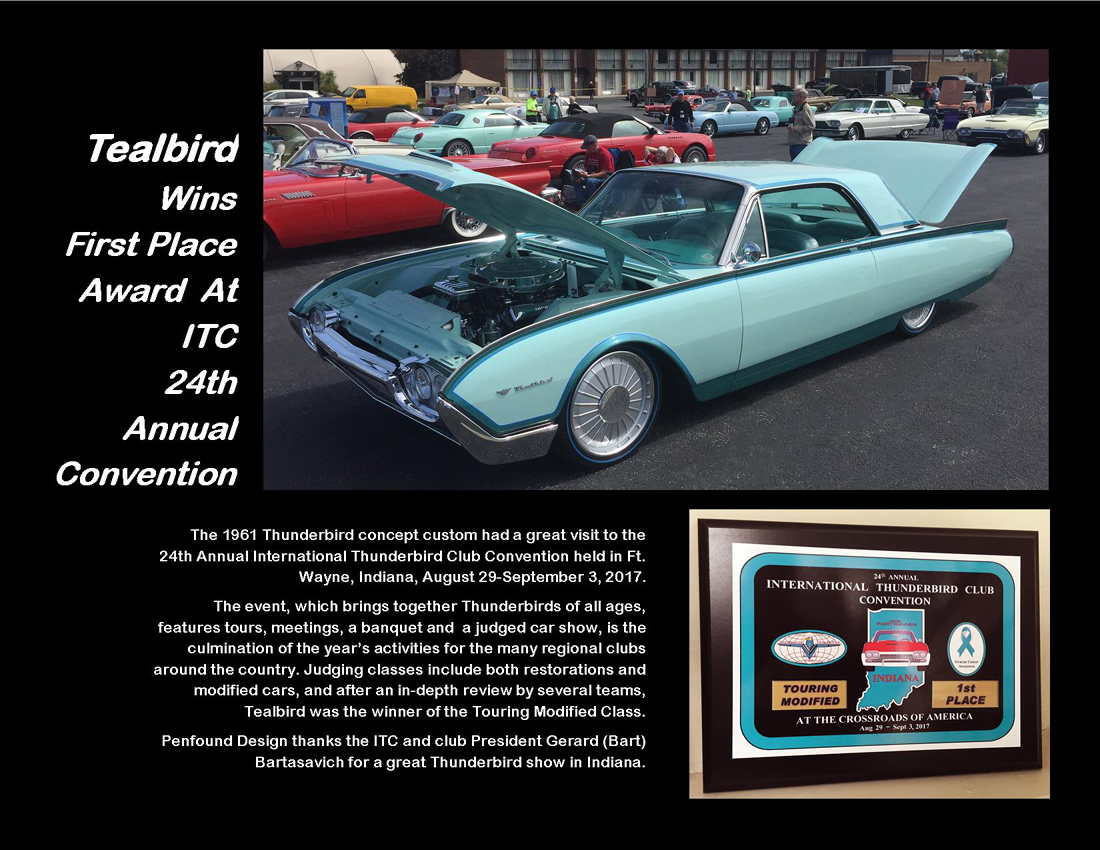 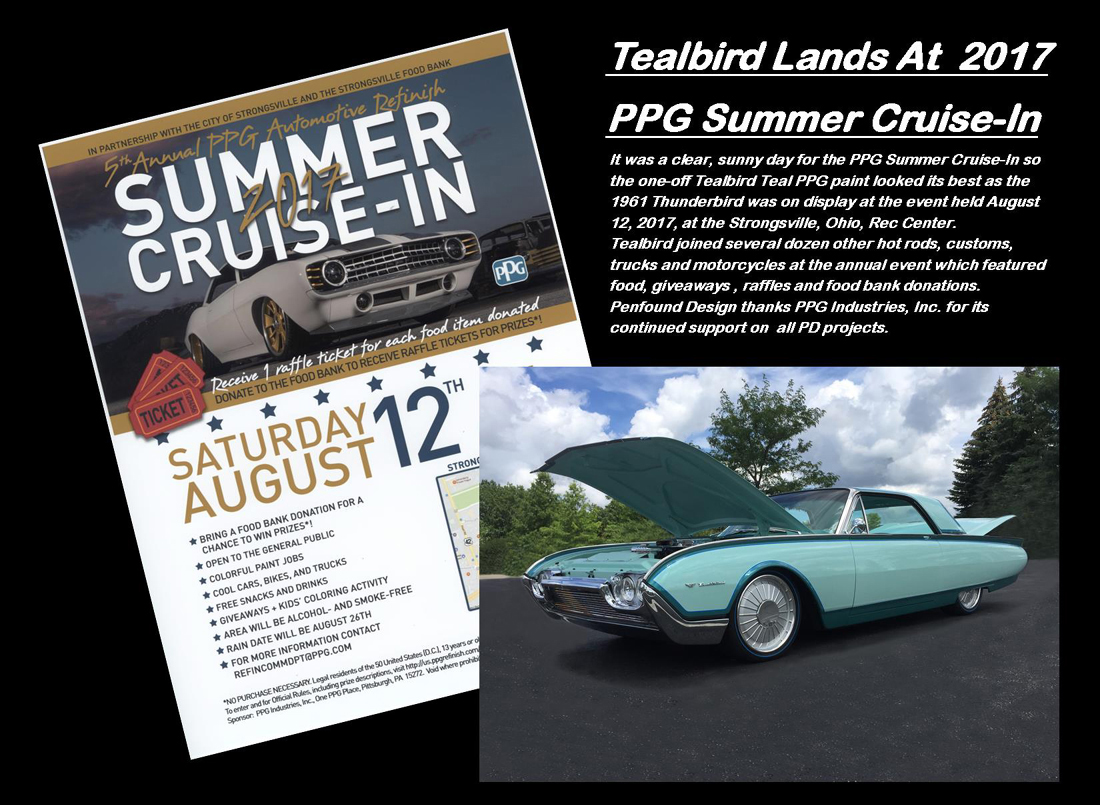 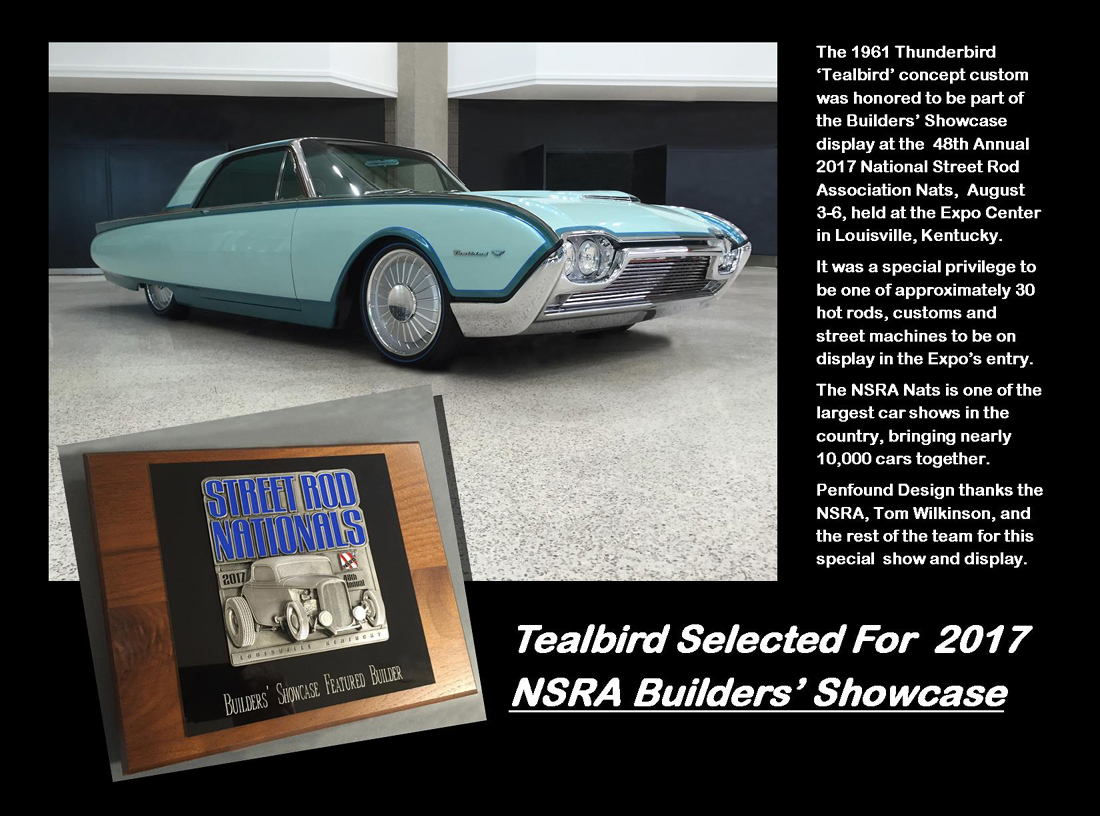 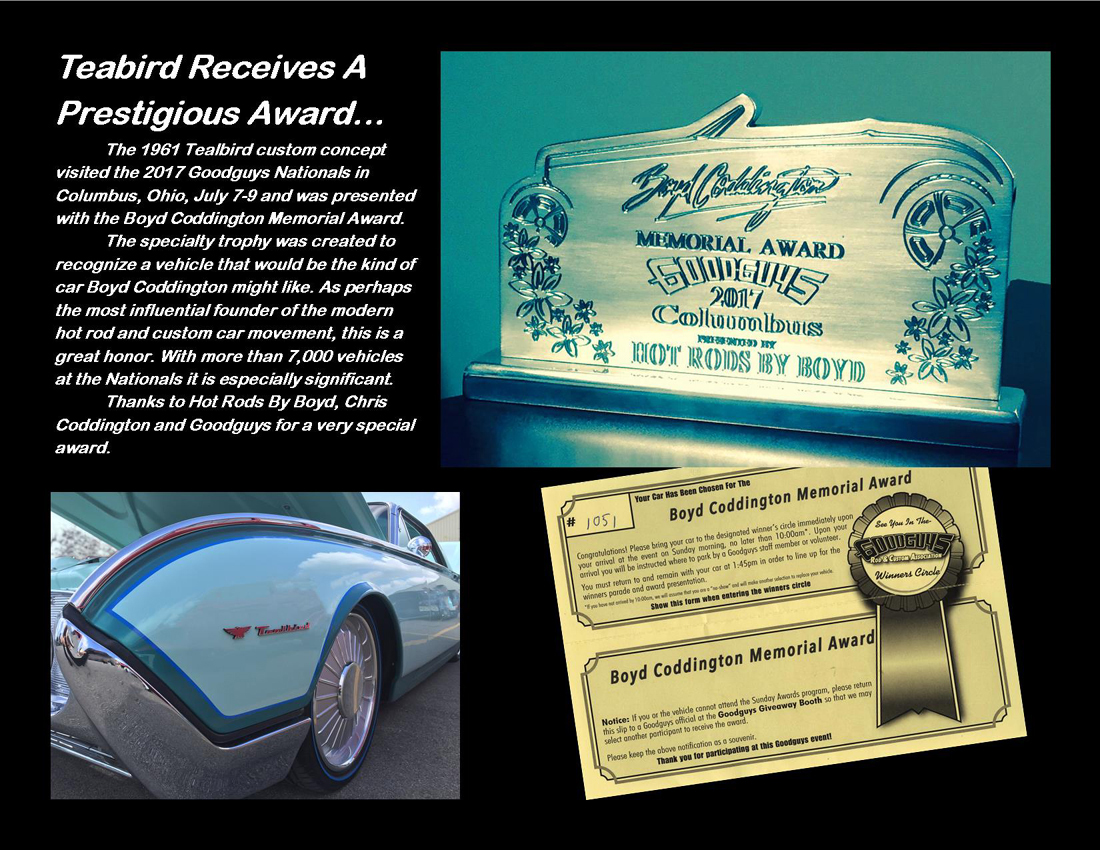 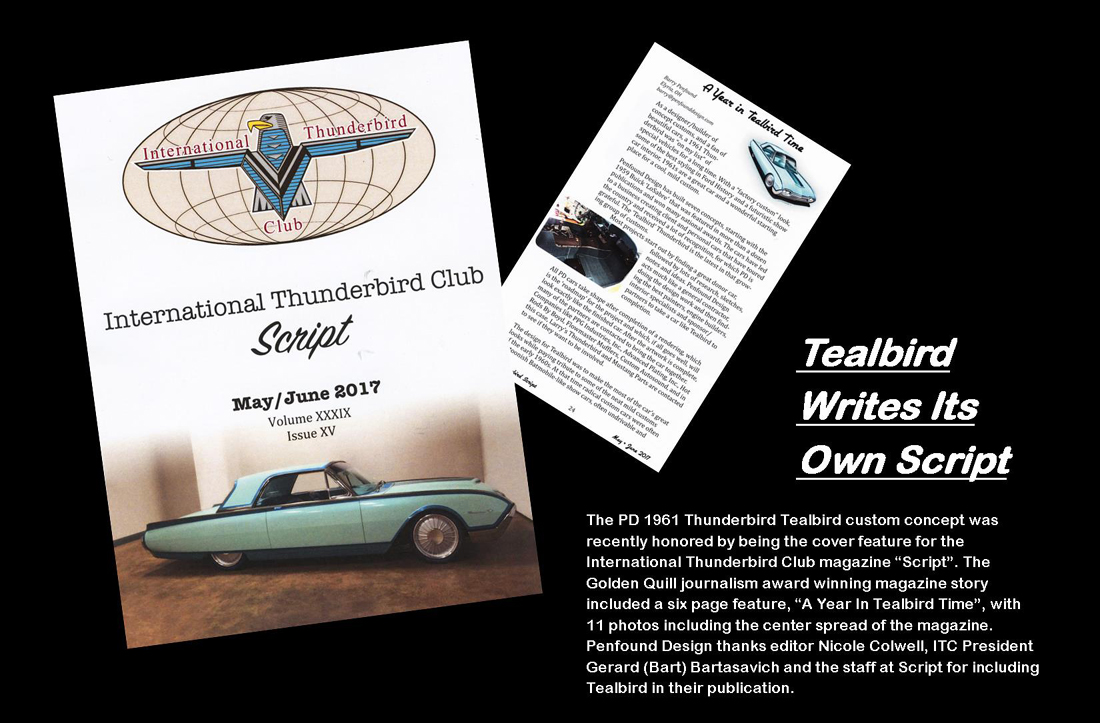 Sometimes people, companies, and even cars can get in a rut. Everything is going along well, so why rock the boat? Until, one day, things just need a little shakeup.

That’s what happened to the Penfound Design 1955 Ford Thunderbird a while ago. As an original, 40,000-mile first year two-seat Thunderbird, the car has earned its place as one of the first true American collector cars, because even in the 1950s folks saved them for special occasions. This car has a three-owner local history, has every option available except the $8 backup lamps for some odd reason, and drives like a survivor … not a sports car, but a personal luxury car as originally intended. Its past achievements include an invitation to Ford’s 100th anniversary in Dearborn in 2003, so it isn’t the kind of vehicle that cries out to be modified.

So what could give the ’55 Thunderbird some Penfound Design personality without hurting its historical rep? How about wheels and tires?

There is no question that perhaps the biggest impact that can be made to a car is by changing wheels and tires. It seemed like the best way to give this car a new lease on life and NOT endanger its historical status. There are a thousand ‘looks’ and a million wheels to get there, but for this Thunderbird a ‘period appearance’, resembling how it might have been changed at the time it was built, seemed like a great answer. The ’55 had to be both new and ‘old school’.

After lots of review, one of the favorite choices to emerge was the Rocket Wheels Gray Igniter, a wheel with a 1960s race car feel. The igniter is available in a 15-inch size like the OEM steel wheels, has a cast grey center and a polished rim, plus a newly available ‘bullet’ center cap that resembles the bullet shape on the original equipment hubcaps and wire wheel-like trim rings that were optional on 1955 Thunderbirds. It looked like a perfect choice!

Rocket Wheels enthusiastically joined in the project and also brought Coker Tire on board, since PD was planning on using a black wall version of the original Firestone Deluxe Champion 6.70X15 bias ply tires that were standard equipment on the car. The wheels and tires arrived mounted, balanced and ready to be installed on the Thunderbird, which was handled by PD advisor and ace independent mechanic Bob Krekel. As part of the visual change, the skirts were removed which added a style of its own. Within hours the personality of the ’55 was changed dramatically.

Check out the images of the change from factory style to the Rocket Gray Igniters. It has given the 1955 a new look … and a new outlook. The ‘55 should also be seeing a lot of road miles in the near future!

Thanks to Rocket Wheels, Newstalgia, Coker Tire, and David Coker for helping to make it happen. 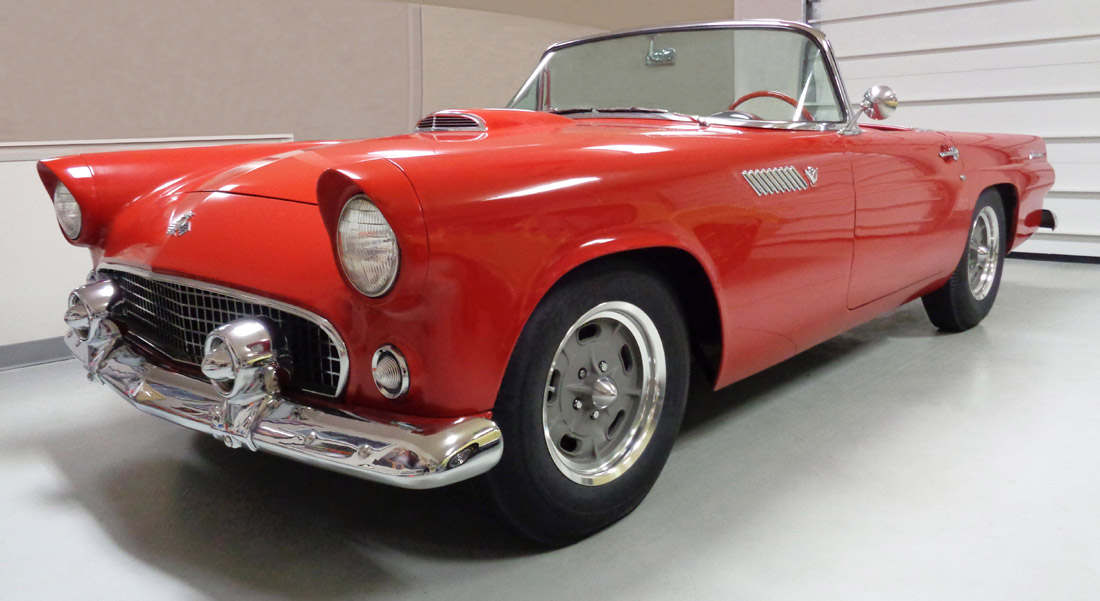 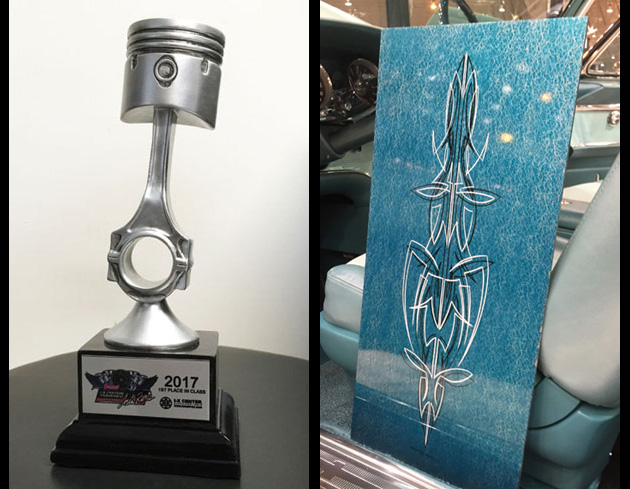 The 1961 Thunderbird ‘Tealbird mild custom made its first appearance in Cleveland, Ohio, March 17-19, 2017, at
the I-X Piston Powered Cleveland Autorama, joining hundreds of vehicles celebrating every aspect of cool transportation. Parked within eyesight of airplanes, boats, race cars and even farm tractors that fill the giant I-X Center, Tealbird was displayed in the “John Shapiro Cruisin’ Times All-Stars Thunder Row” in honor of a great
car fan and a good friend of Penfound Design cars. As part of the All-Stars display, a special event jacket was presented to each car owner. In addition to the display honor, Tealbird was awarded First In Class by the ISCA judges. The crowd, especially on Saturday, was huge at the event, and the Thunderbird was well received. Penfound Design thanks the ISCA, Steve Legerski, Bill Perrien and the I-X Center staff, and Cruisin’ Times and the Shapiro family, for a great show. As a special bonus, a great piece of teal pinstripe art by “Brian The Brush” was added to the Penfound Design garage as part of the charity auction held each year at the show.

While it took an extra last minute effort by everyone involved, Tealbird made its official debut at the Detroit Autorama, February 24-26, 2017, and it also made a lot of new friends along the way. Judging from the crowd reaction, the old school scallops combined with new age 19-inch one-off wheels and custom blue stripe tires, were well received, and the other ingredients like the vintage Samsonite 1960s luggage with old travel stickers and the traditional chrome-heavy engine room added to the successful first appearance. A special Tealbird bonus was winning the ISCA Best Paint Street Achievement award, presented at ceremonies February 26. Penfound Design thanks Aaron Lynch who painted Tealbird, plus Jeff Miller, transportation, Bob Krekel, mechanical, Motorheads, engine build, Chuck and Klaus Grm, interior, plus John Lasky, Arden Kyer and others for getting the car together for its debut. Appreciation goes out to the ISCA, Detroit Autorama, and the Michigan Hot Rod Association for producing one of the greatest hot rod and custom shows in America, and the many product sponsors who can be visited at the “LINKS” section of the Penfound Design website … www.penfounddesign.com 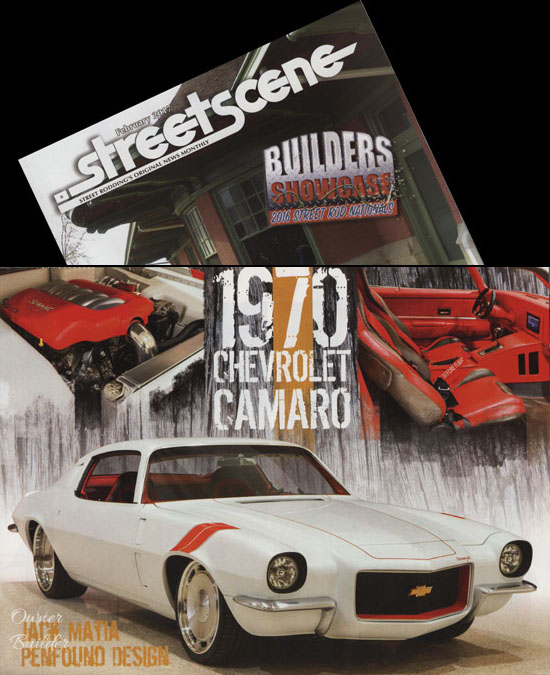 The 1970 Scramjet Camaro was given a special honor as it was featured in the February, 2017, issue of the National Street Rod Association Streetscene magazine. As one of 34 vehicles selected to be on display in the Builders’ Showcase, the Scramjet Camaro joined a very special group of custom cars, trucks and hot rods.

“This was the eleventh year professional builders from all across the United States displayed their latest creations for all attendees to see,” the magazine article explains. “Everybody entering and exiting the building over four days during August 4-7, 2016, were treated to fresh, new project cars that are sure to go on to win prestigious awards, appear on the covers and pages of national magazines and are cutting edge examples of where our hobby is headed.”

Since more than 10,000 cars attend the National Street Rod Association Nationals each year in Louisville, Kentucky, it was gratifying to have the Jack Matia-owned, Penfound Design Camaro included in this unique display of some of the best vehicles in the country. It is especially rewarding to know that the Buick Losabre, Chevrolet Sportsroof, Sabertooth GTO, Cadillac Cambiar and Chevrolet ‘Inpala’ have all been displayed in the Builders’ Showcase in past years, so the Scramjet Camaro kept up a great tradition.

Penfound Design thanks the National Street Rod Association, Tom Wilkerson, Louie Mayall and the entire NSRA crew for making the Camaro and Penfound Design feel at home. The 2017 NSRA Street Rod Nationals will be held August 3-6 at the Louisville, Kentucky, Exposition Center. 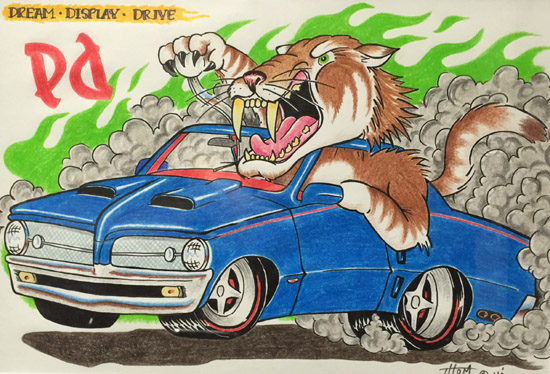 The Sabertooth GTO Gets A Tiger In The Driver’s Seat

Thanks to some great artwork, the 1964 Sabertooth Pontiac GTO can be seen tearing up the streets like every good “little GTO” should. Drawn by Thom Dumond and presented to Penfound Design, the artwork is in the style of the vintage “Car Toons” of the 1960s and 1970s, and shows the GTO speeding down the road, tires smoking. Since tigers were associated with GTOs back in the day, from the “Tiger Paw” tires they wore to the tiger tails which were often attached to their rear bumpers, Thom made the most of the tiger theme by having one actually DRIVE the GTO.

“It seemed like a cool idea to connect the GTO car and GTO tiger together, and an illustration was my way of doing it,” Dumond said. When Thom isn’t drawing GTO tigers, he works as a tattoo artist and designs t-shirts. He also spends time on his recently renovated Harley Davidson, which he rides year-round, snow and ice permitting. Penfound Design thanks Thom for the neat drawing, and for capturing the spirit of the Sabertooth GTO.