The 1964 Pontiac Sabertooth GTO had a great weekend at the Goodguys 19th Southeastern Nationals at the Charlotte Motor Speedway in Charlotte, North Carolina.

The event is one of the largest shows in the South, bringing together thousands of hot rods, customs and muscle cars on the infield of the speedway grounds.

There was lots of attention for Sabertooth, with crowds around the car for much of the show. It was a perfect backdrop for the GTO, parking on pit road at the track. Most asked question was about the 449 cubic inch motor, which is a stroked version of the original 389 Pontiac engine, hooked to a Richmond Gear five speed overdrive transmission. People also liked the special PPGTO blue paint, and the one-off 20-inch wheels.

While the car spent a lot of time at the Goodguys event, the GTO also made a trip to Roxboro, about 40 miles southeast of the Speedway, for their weekly cruise-in. A neat event with more than 100 cars lining the streets of town, plus food and music, the folks welcomed the Pontiac with open arms and gathered around for a look at the visitor from Ohio.

Back at the Speedway on Saturday, the GTO had a chance to take a few laps on the high banks as the sun set and completed a fun show and weekend.

PD thanks everyone at Goodguys and the city of Roxboro for two special car shows.

The Goodguys Speedway Nationals held at the Indianapolis Motor Speedway, September 20-23, 2012, was VERY good for the Sabertooth GTO as it won the Flowmaster American Thunder pick at the event.

As one of more than 2,500 cars in attendance at the show, the GTO was one of only about 75 cars to receive an award at the prestigious car gathering. Held inside the grounds of the legendary race track, not far from the Speedway Museum , the cars were on display in and around Gasoline Alley.

As part of the event, vehicles entered at the Speedway Nationals get to take a lap around the track, and it was a great experience crossing the brick start/finish line with the sound of the Pontiac ’s tri-power 449 cubic inch motor filling the front straight.

In addition to the time parked near the massive Speedway tower, Sabertooth managed to get in some street driving in Indianpolis, including the Saturday night cruise-in at the event’s host hotel with dozens of other special customs and hot rods.

Thanks to Goodguys for a great event and Flowmaster for the American Thunder award. 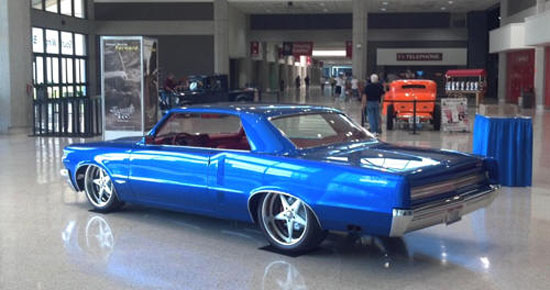 For the fourth time in as many years, a Penfound Design vehicle was on display at the National Street Rod Nationals in Louisville, Kentucky, August 2-5, 2012.

Joining special hot rods and customs from across the country, the Sabertooth GTO was one of about 30 vehicles shown in the lobby of the Louisville Exposition Center. As one of the premier shows in the country, with thousands of cars and spectators in attendance, it was a great opportunity for the GTO to be seen up close.

It is a special weekend at one of the most influential custom and hot rod events in the country, and Penfound Design appreciates the continued support of the National Street Rod Association. 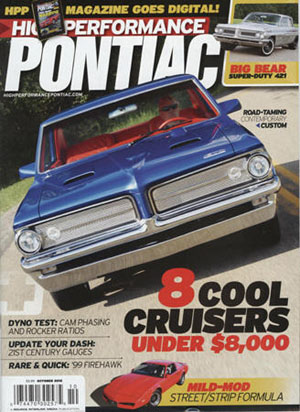 There are only 12 chances to be featured on the cover of a magazine in a year, and High Performance Pontiac selected the Sabertooth GTO for its October issue. Not only that, but the car is shown on the contents page of the magazine, plus a six-page feature inside.

Photographed by HPP editor Thomas A. DeMauro in rural Pennsylvania, the feature called “Sweet Tooth” is a detailed story about the GTO build, and highlights the body modifications and interior details of the car.

“What does it take to stand apart from well-built Pro-Touring cars and Restorods?”, DeMauro asks, “More mods…where you see them.”

He concludes: “The custom street touches ensure that Sabertooth will garner attention from all who have a sweet tooth for meticulously designed and built Pontiac performers.”

Thanks to the High Performance Pontiac team for a very cool experience. 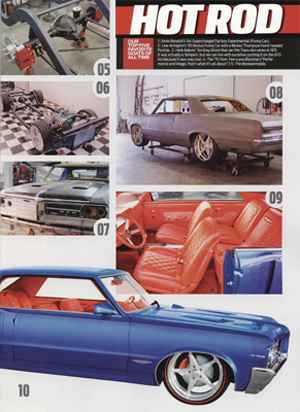 It’s special when a magazine features a Penfound Design car, and it was a great experience to see the GTO in a two-page story about the evolution of the car from 99,000-mile just-barely-survivor to Sabertooth.

The photo feature is in the September issue of Hot Rod and traces the history of the GTO through each step of its assembly, using Penfound Design photos to help tell the story.

“HOT ROD showed the first stages of the build in 2006, but several other car projects at Penfound Design kept the GTO on the back burner,” the article explains. “As of this summer, the car is complete and touring the nation’s car shows via Pontiac power.”

PD thanks Hot Rod, Brandan Gillogly and David Freiburger for including Sabertooth in Hot Rod. 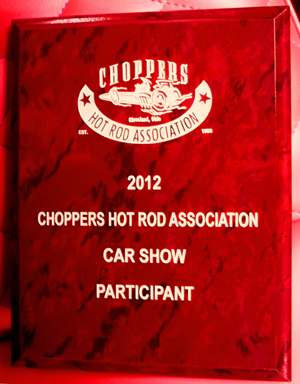 Held April 13-15, 2012 in North Olmsted, Ohio, the annual event highlights hot rods, customs, and motorcycles and is organized by the Choppers.

Begun in the 1950s as a club for ‘chopped’ cars only, the show has expanded over the years to feature some of the best vehicles in Ohio.

The dozens of modified road machines were on display at the North Olmsted Soccer Complex, featuring 1965 and older vehicles.

While the Sabertooth was nearly too ‘new’ to be included in the show, it had a great response from the crowd and continued to make new friends.

Thanks to the Choppers for a great event!

The GTO Plays In The Superbowl Stadium As It Visits Indianapolis

It’s doubtful that there could be a more interesting location for a car event than the Lucas Oil Stadium in Indianapolis, Indiana, especially when the cars are right out there on the field as the center of attention.

This year’s Hot Rod & Restoration Show was held in the same stadium that the Superbowl visited just weeks earlier. The Sabertooth GTO was one of 50 cars, of the hundred-plus vehicles that applied, that was invited to attend and be on display.

Held on March 22-24, 2012, this year’s event brought dozens of industry companies to Indy. They provide products and services for the growing hot rod and custom car, truck and motorcycle world, and this was their chance to shine in a special facility. Several of the companies that partnered on the GTO, including Flaming River Industries, Inc., Design Engineering Inc., SSBC Brakes Corporation, Totally Stainless, Brickyard Classic Radials, Art Morrison Enterprises and more had displays offering advice and product information to show visitors.

As one of the Featured Vehicles at the event, which is presented by Steel Rubber Products, the Sabertooth GTO got lots of looks and fit in well with one of the coolest car show locations ever. Thanks to Eric Saltrick and the staff for their help in making it a great experience.

Sabertooth GTO Gets A Great Reception At The 2012 Cleveland Autorama 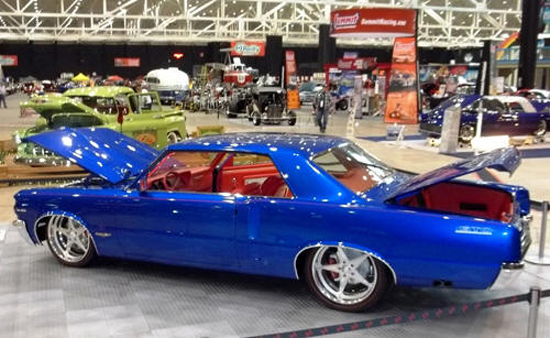 The Sabertooth prowled the giant IX Center south of Cleveland March 16-18, 2012 and ended up capturing a lot of new friends, plus a second place award in the Full Hardtop Custom category.

Fresh off its debut at the Detroit Autorama, the GTO had a great location at the entrance to the show, and hundreds of people took photos, asked questions and hung out with the 1964 Pontiac. Many of the comments centered around the intense PPGTO blue paint, with equal attention for the red new school/vintage look of the four-bucket-seat interior.

While Penfound Design cars enjoy the experience of the ISCA indoor shows, they are also at home on the streets of America at outdoor events, cruise-ins and road tours. The Sabertooth GTO will be visiting all kinds of new venues during the months ahead, meeting new friends who enjoy seeing this 1960s musclecar icon.

Thanks to the Heitman family and all the folks who make the Cleveland Autorama a great event.

Sabertooth GTO Starts To Prowl At The 2012 Detroit Autorama 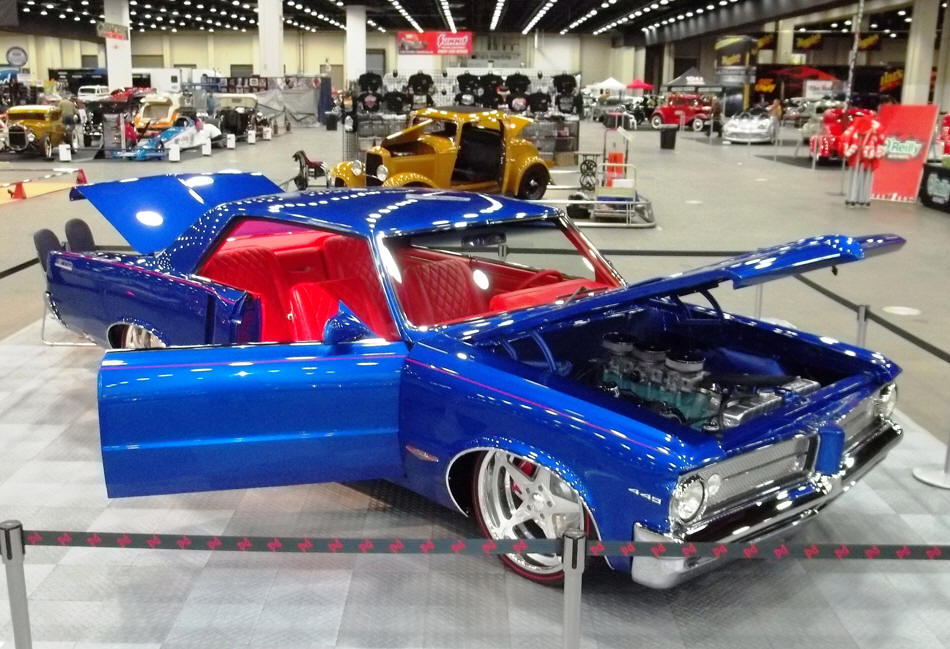 The 1964 Pontiac Sabertooth GTO was unleashed at the 2012 Detroit Autorama, and tiger fans seemed to like it. From the casual observer who stood back and whispered “Nice GTO!” to the hardcore detail hunter who noticed all the body, interior and engine mods on the GTO, the speed and style icon made a lot of friends. In the jungle of high performance ‘60s performance cars, the 1964 is arguably the first modern muscle car. The idea behind Sabertooth is to take all of the things that made the original such a hit and bring it into the 21st century.

Any muscle car starts with the drivetrain, and Sabertooth is no exception. Since Sabertooth is a REAL 1964 Pontiac GTO, it uses the original motor with lots of changes: 449 cubic inches, 507 HP and 528 lb-ft. of torque; Richmond Gear five speed OD transmission; Barry Grant “Six Shooter” tri-power and more. The result? Performance worthy of a tiger.

To make Sabertooth happen, Penfound Design had great help from some of the performance leaders in the industry. Partners include:

Some of the most talented people in the custom car world were involved in the creation of the Sabertooth GTO. While the concept was developed by Penfound Design, the following builders, fabricators and craftsmen made Sabertooth happen, among them are: