Back in the day, when the “little book” pocket-sized versions of Car Craft, Rod & Custom and Custom Rodder were on the news stands, bold car buyers would pick up their new 1959 Lesabre, Thunderbird or Impala and get them customized as quickly as possible. There are stories from the late ’50s of people driving them DIRECTLY to the custom shop when they left the dealership, hoping to get them back on the street in HOURS, not weeks.

Instant customs were born. That is the notion behind “Inpala”…taking a stock, original paint, survivor ’59 Chevy and doing as much as possible WITHOUT resorting to radical body modifications, paint changes or engine swaps. While some of those ’50s and ’60s mild customs were the inspiration for the 2007 “Inpala” concept, it has unique contemporary features as well…

“Clean and smooth” were the basic guidelines for Inpala, so the construction cleaned up the original design. Among the changes were the removal of the stock grill, replaced with a one-off stainless round-stock grill which matches the original grill contour. New headlight bezels and “eyebrow” grills above the grill were painted and detailed, while clear headlights were added. The original bumper and massive bumper guard were replaced with one-piece body-colored “California” bumpers with bolts filled.

Out back a similar “cleanup” was accomplished with painted bumpers and paint accents added to the taillights. Flat, red plexiglass taillight lenses were also added, and backup lamps eliminated with a smoothed rear valance.

“Stance” was critical for ‘old school’ customs, and the new Inpala reflects that look. Lower springs (two inches in front, three in back) were added while painted rocker panel moldings help to visually bring the car to the ground.

Perhaps the biggest and most effective change is the wheel/tire update. Designed to look to the past and the future, the wheels are 18-inch solid billet Wheel Vintiques units, with the centers body colored. Special adaptor fasteners were created by The Wheelsmith to accept 1959 New Old Stock “dog dish” center caps. Modern Goodyear Eagle F1 GS-D3 performance tires are used. The result is a compliment to the “instant customs” of the ’50s and the “new millennium” cars of today. 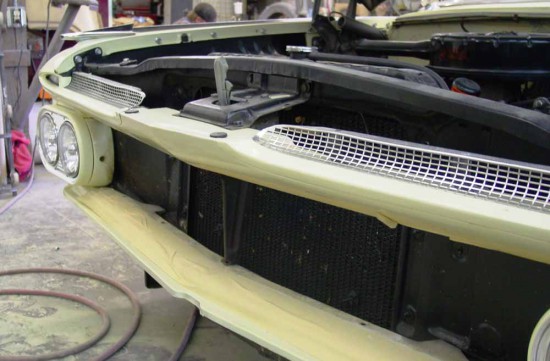 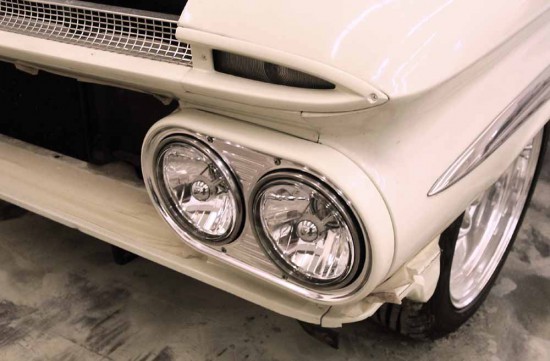 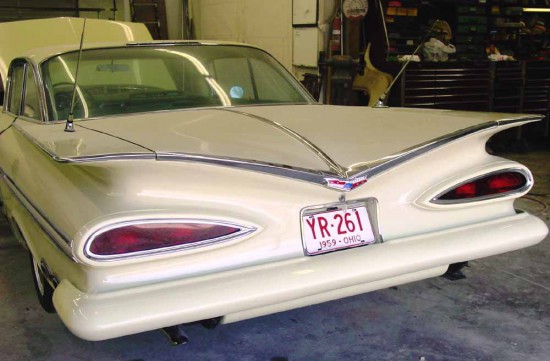 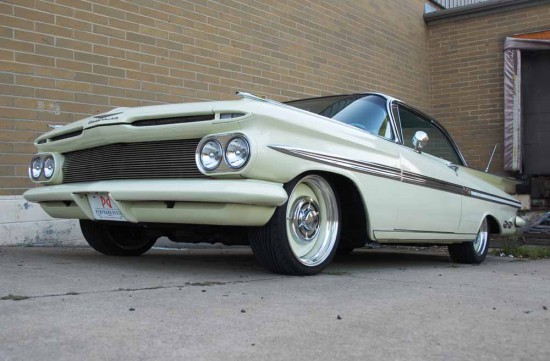