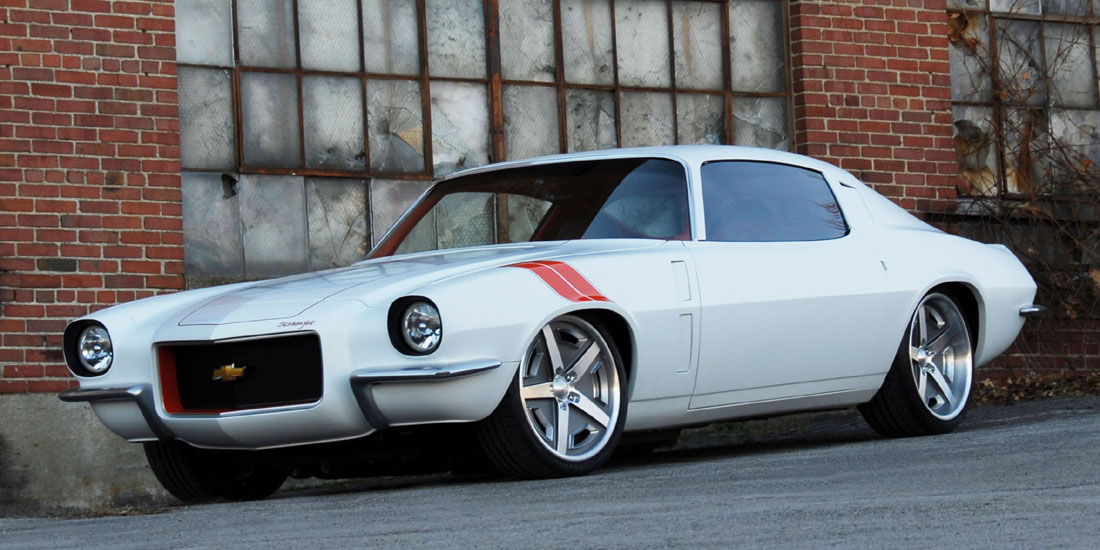 The “space plane” look of the 1970 Chevrolet ‘Scramjet’ Camaro, with smooth sides, aircraft style instrumentation and disc-style 19-inch one-off wheels, got a major shake-up with the addition of some of the newest Hot Rods By Boyd wheels just introduced by the company.

Designated as HRX4, the new wheels have a pro-touring, street racer look that totally transforms the appearance of Scramjet and makes it even meaner, if that’s possible.

The special finish on the Camaro HRX4s includes a brushed aluminum “hoop” and spokes, with charcoal accents on the insert of the wheel. Other details include non-flange lips and rear mounted air valves designed to keep the wheel face as stylish as possible. Sizes are 19”X8” front and 19”X10” rear.

It also proves that the biggest changes possible on a custom car are paint color and wheels.

Thanks to Chris Coddington at Hot Rods By Boyd, and ‘Scramjet’ owner Jack Matia for encouragement and assistance with the transformation. It will give the Camaro more than one ‘look’ as it takes to the streets of America. The ‘Scramjet’ Camaro is also featured on the Hot Rods By Boyd Facebook page. 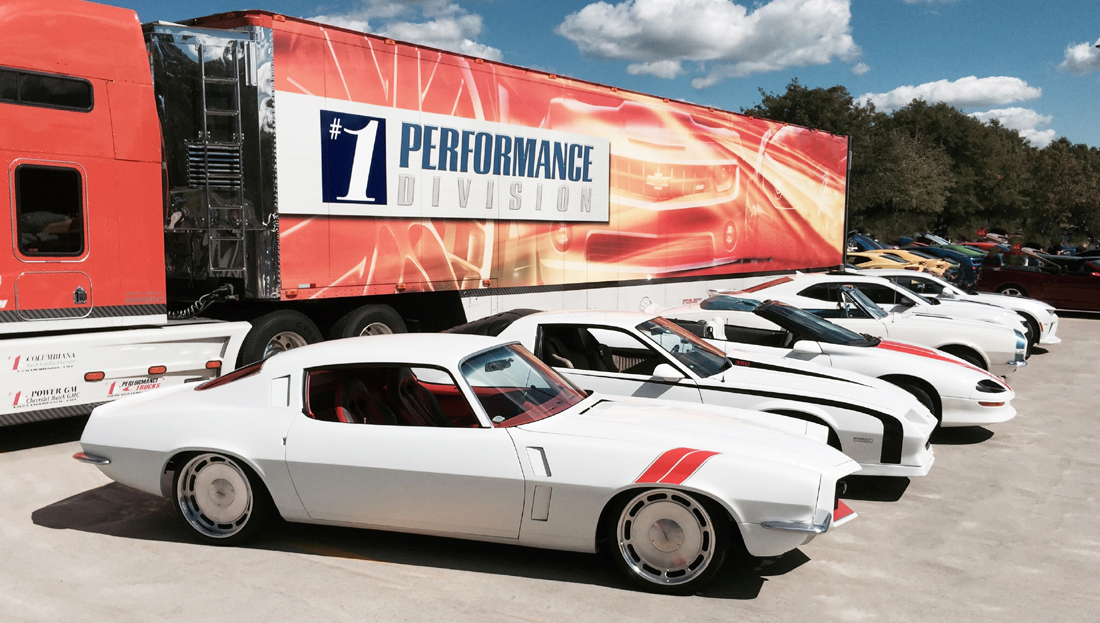 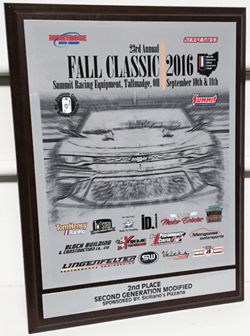 The Penfound Design 1970 Scramjet Camaro owned by Jack Matia was surrounded by scores of its relatives as part of the 23rd Annual Camaro Fall Classic held September 10 and 11 at Summit Racing Equipment headquarters in Tallmadge, Ohio. The event, coordinated with Camaro clubs from Ohio, neighboring states and Canada, is the center for all things Camaro. The two days activities include judged and non-judged display classes for the entrants, dash plaques and goody bags, door prizes, special displays and professional show photos for each of the cars present. The displays featured 2017 ZL1, 1LE, and SS Camaros plus special performance Camaros like a COPO version. Additionally there were food concessions, DJ entertainment, and 50/50 raffles. Of course the Summit Racing facility was open during the Camaro show, so participants could check into performance parts, cleaning gear and Camaro t-shirts.

The Scramjet Camaro won a Second Place award in the Modified Class and was featured in a special collection photo of all six Camaro generations from 1967 through 2017.

Thanks to the staff of the North Eastern Ohio Camaro Club, Discovery Photo and Summit Racing for a great event.

The temperature was pushing past the 90-degree mark on Saturday, August 27, 2016, but the Penfound Design 1959 Buick LoSabre and 1964 Sabretooth GTO brought some cool attitude to the PPG Automotive Refinish Summer Cruise-In held near the company headquarters at the Strongsville, Ohio Rec Center. The annual event, designed to highlight cars, trucks, motorcycles and most any other wheeled vehicle which use PPG products, brought scores of entrants to the park-like setting.

Open to the public, the jointly hosted show by PPG Industries and the City of Strongsville, included free snacks and drinks, giveaway posters, and kids’ coloring activities. A raffle was also held to benefit the Strongsville Food Bank.

The cruise-in gives exposure to the colorful and creative work by regional car owners and builders and it was great having a chance to show the Buick and Pontiac GTO to event visitors and consult with PPG technicians about future products like the upcoming 1961 Ford Thunderbird and 1980 Chevrolet El Camino, both of which will use PPG Industries materials.

Penfound Design thanks Jennifer Boros, Pat Antoine and the entire PPG staff for their continued support of Penfound Design projects, and Ric Keller and Thom Dumond for help with driving and set up of the cars.

One of the largest hot rod and custom car shows in America was host to 10,000 cars August 4-7, 2016, in Louisville, Kentucky, and the Penfound Design 1970 Scramjet Camaro, owned by Jack Matia, was one of the cars featured in the Builders’ Showcase at the event. For more than four decades, the National Street Rod Association has staged events from coast to coast, and the Godzilla of the season is the NSRA Street Rod Nationals. Held in August at the Louisville Expo Center, the Nats is a combination cruise-in, car show, merchandise center and all around party for the folks who bring their 30-year-old or older hot rods, muscle cars, customs and trucks to the city. While many folks visit the huge Expo Center with hundreds of performance product merchants offering wheels, tires, paint, car bodies and frames, engines and virtually every other part needed to build a car, there is also a river of colorful cars and trucks constantly flowing through the city on freeways, city streets and through hotel parking lots.

It has been a special honor to have shown five Penfound Design cars in the Builders’ Showcase display area in the expansive lobby of the Expo Center in the past, and thousands of visitors look at the cars each day before and after seeing the products on display. Many of the partner/sponsors for Penfound Design cars also appear at the NSRA Street Rod Nationals, including PPG Industries, Inc., Ride Tech, Design Engineering, Inc., Flaming River Industries, Totally Stainless, Advanced Plating, Chevrolet Performance, Tuff Stuff and many more. These companies are on hand to answer questions, provide catalogs and other information for folks building their own cars or using ideas to work with builders to help create a special car.

Penfound Design thanks the entire National Street Rod Association staff, including Tom Wilkerson, Special Events Director, for their help in making the Builders’ Showcase, and the Street Rod Nationals, an awesome experience.

More than 200 Corvettes from 1953 through 2017 were on display parked along the streets of Vermilion bringing color and sound to the Lake Erie shore community. The annual event, held by the Lake Shore Corvette Club each summer, has shown steady growth and has brought both club members and other Corvette owners together in a great mix that includes people’s choice judging, a Vermilion mayor’s trophy and, as a sponsor of the show, a Penfound Design pick. This year, after evaluating many interesting and spotless Corvettes, the PD selection was a rare 1962 Corvette owned by James Casto. Bought by James in 1988 the rare fuel-injected Corvette has been a continuing “work in progress”, according to the owner, but looked very complete and roadworthy as it sat on the curb lawn in Vermilion. Besides the fuel-injected engine, the black paint combined with a fawn beige interior makes the car even more unique, plus the car has both a soft convertible top and removable hard top.

The PD pick Corvette was only one of the more than 25 award winners at the Vettemilion show, plus there were two new ZO6 Corvettes on hand from another event sponsor Pat O’Brien Chevrolet and representatives from XTreme Performance. Penfound Design thanks Lake Shore Corvette Club and the city of Vermilion for making the 2016 show a success. 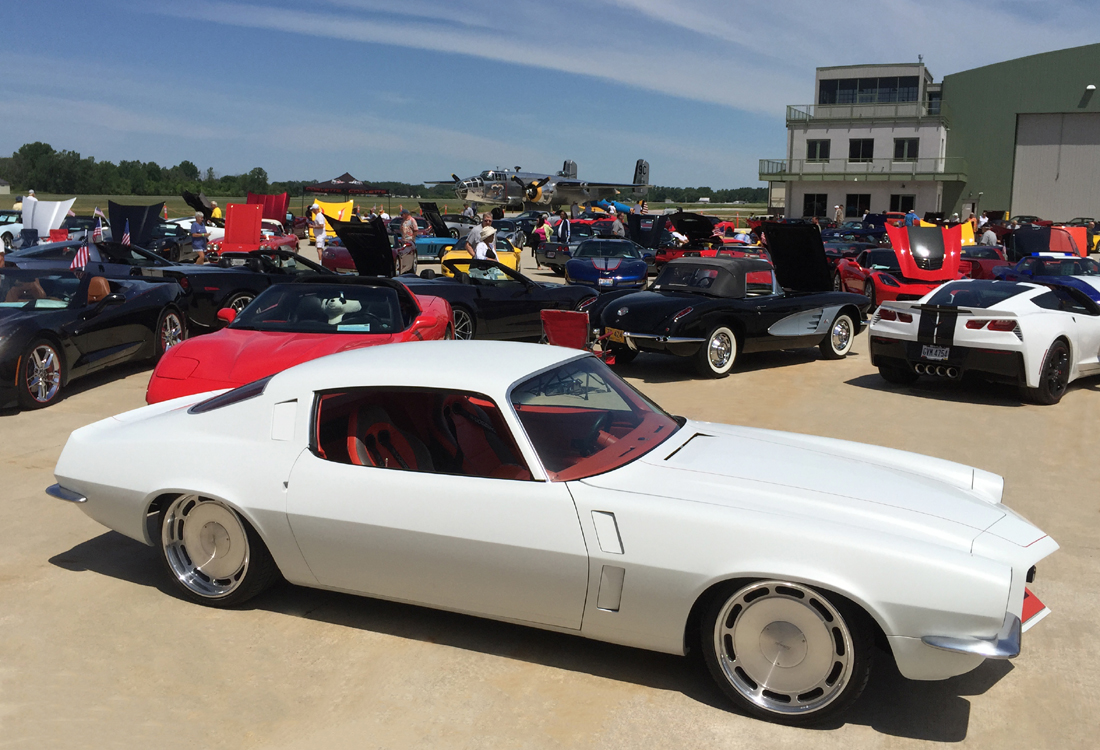 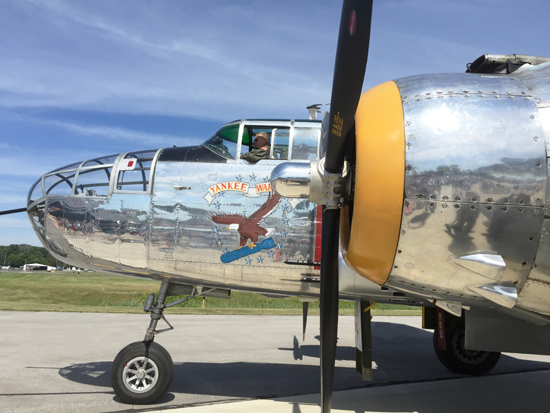 The 1970 Scramjet Camaro got a special invitation to appear as part of a Lake Shore Corvette show at the Port Clinton, Ohio, Municipal Airport June 17, 2016. It was an appropriate setting for the Scramjet with its Mach 5 experimental plane styling cues and fighter pilot helmet on board the special custom concept.

Scores of Corvettes from the early 1950s through 2016 were on display, making a colorful background for the Chevrolet Performance LS7 427 Corvette-engined Scramjet. Since many of the other components are Corvette-related, like the Art Morrison front clip with C6-style disc brakes, custom Corvette door handles, and “fly-by-wire” accelerator pedal, Scramjet fit right in with the dozens of Chevrolet’s sports cars surrounding it.

Of course the airport, with the Liberty Aviation Museum, featuring a restoration project of a Ford Tri-Motor airplane which is the type used for decades to fly passengers from Port Clinton to Put-In-Bay, its museum shop and one of the coolest diners in the country served as an excellent setting for the Corvettes and Scramjet. Unique to the event were rides offered in a restored B25, which served in combat in World War II, and was purchased in 1988 and restored over a four-year period. The sound of the B25 alone made the show special.

It was a great get together for the Corvettes, some legendary historic airplanes and an aircraft-inspired Scramjet Camaro. 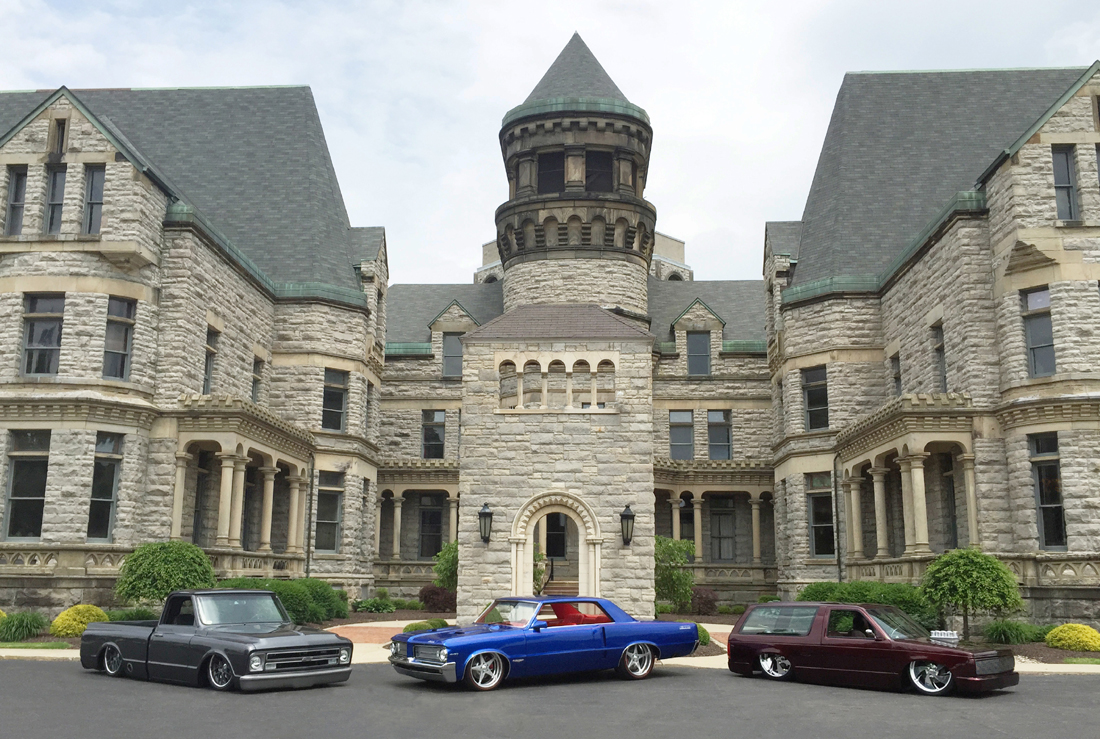 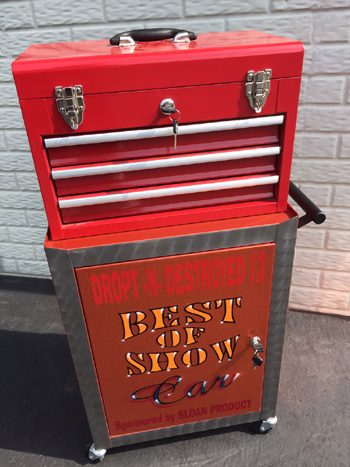 The 1964 Sabertooth GTO has been called bad, mean and nasty so it wasn’t a big surprise that it ended up at the Ohio State Reformatory in Mansfield, Ohio, May 28-29, 2016. The good news was that the custom concept was there as part of the 13th Dropt-N-Destroyed car show that is held annually at the former prison.

Dropt-N-Destroyed brings hundreds of customs, mini trucks, full size pickups and tuner cars together on the lawns around the former Ohio State Reformatory for a weekend of display. A neat bonus for those who attend the event is that they can also take a tour of the reformatory, visiting the cells, gathering rooms and warden family residence. While many of the rooms and the exterior of the building have been restored, the unrestored areas of the building are even more interesting, as well as the ghost stories that are told about the facility, plus the tales of filming movies like “The Shawshank Redemption”.

Vehicles were on display Saturday and Sunday, with an awards ceremony Sunday afternoon. In addition to the many class awards, three “Best Of Show” awards were given, with the Sabertooth GTO winning “Best Car”. Special tool chest awards were given to the “best” vehicles.

Penfound Design would like to thank the Dropt Out team, including Aaron Coombs, for presenting a great event, and giving Sabertooth a good conduct release from its two days at the reformatory.

It was a great weekend for Penfound Design March 18-20, 2016, as all three cars that attended the event won awards.

The PD display was part of a special event this year as the Cleveland Autorama held its 50th anniversary show in Cleveland, Ohio. The I-X Piston Powered Cleveland Autorama brought more than 1,000 vehicles together, including cars, trucks, motorcycles, boats and airplanes for three days with thousands of spectators in attendance.

The PD 1959 Buick LoSabre was selected as one of 50 cars representing past winners at the show, in LoSabre’s case receiving five awards in 2002. At this year’s show, the Buick received a special ring from Cruisin’ Times magazine as well as a First Place ISCA Award in its class. In a separate Penfound Display honoring the event, the Sabertooth 1964 GTO and 1970 Scramjet Camaro won Second and Third Place Class Awards as well.

Penfound Design thanks Cruisin’ Times, John Shapiro, and the I-X Center team, including Steve Legerski and Bill Perrien for a very special weekend. 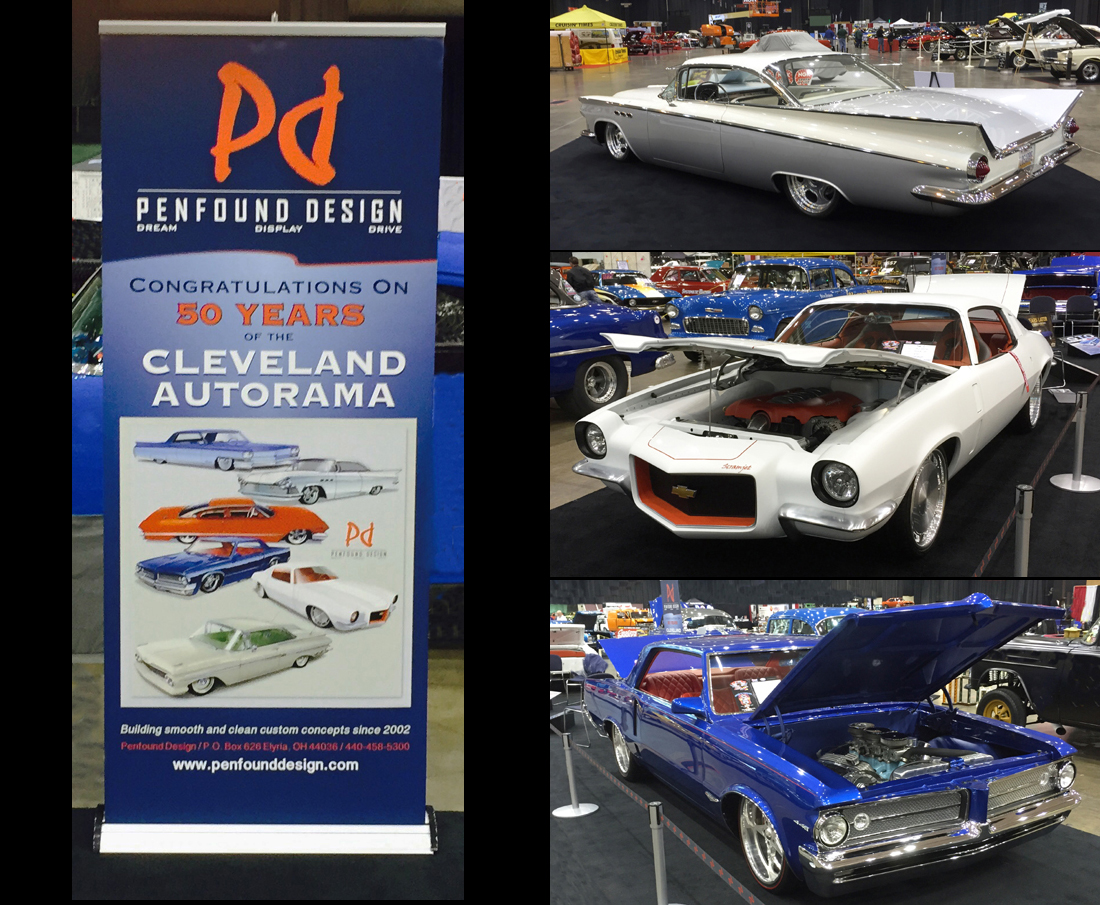