Penfound Design cars begin as an illustration so that the craftsmen, sponsors, media and customers can get a real understanding of the car before any construction begins. It’s a great way to make changes to the car without doing metal work, or worse, having to re-do work on a project.

In the case of the Impala SportsRoof the drawing already existed, since legendary illustrator Steve Stanford had drawn the car for a magazine article in 1996. Penfound Design had suggested the car when Ohio Chevrolet dealer Jack Matia asked for a custom like LoSabre or Cambiar, but be “all Chevrolet”. With everyone on board to do the project, the drawing became the “roadmap” to follow, with even the smallest detail examined to make sure it reflected the illustration. Steve Stanford himself confirmed the use of the 1960 Plymouth roof, 1964 Thunderbird interior, 1959 Oldsmobile steering, and even the 1961 Thunderbird rear fender spears used as FRONT fender trim on the SportsRoof.

Dave Rieger and his crew at Classic Revivals in Lagrange, Ohio, came on board to do construction and paint for the car. With a history of work on Cambiar, and a reputation for Corvette restorations, Dave saw the Impala as a unique challenge. His vision was to restore the chassis and engine room as “Best Day Of Production” for the car, using elements of restoration and customizing along the way.

Chuck Grm of Chuck’s Custom Design worked to interpret the drawing’s interior in 3D. His plan was to make the most of the orange, black and white color scheme, while making the interior liveable in the real world.

The drawing was a side view of the “dream car”, so Penfound Design added some special elements to add to the effect. The black cloth for the interior became reproduction 1963 Impala cloth, a one-off square rod stainless steel grill was inspired by the production unit, but brought a smooth, clean look to the front of the Chevy. A 1962 front bumper was mixed with a 1963, parking lamps were moved into the headlamps, and other hood and trunk trim was altered for a custom look. Since the Impala used for the project was a Super Sport with “engine-turned” swirled aluminum rear panel and side trim, a sweep of the same material was used on the roof.

Following is a brief look at the construction of the Impala SportsRoof as it was prepared for the Detroit Autorama and 2006 events. 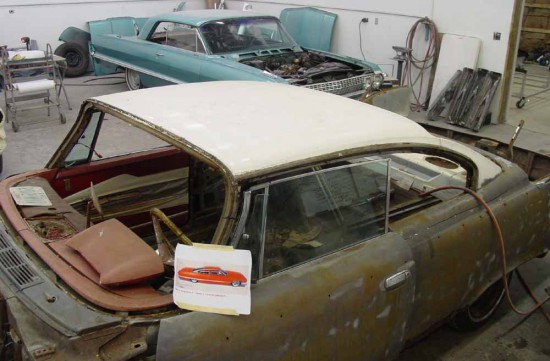 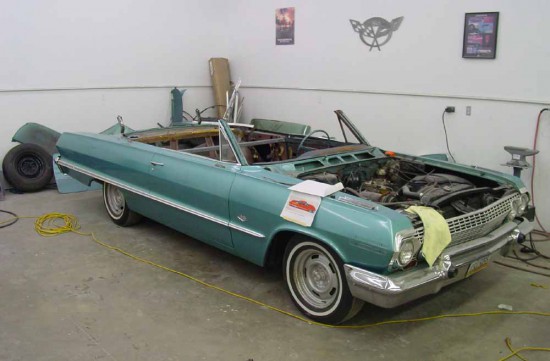 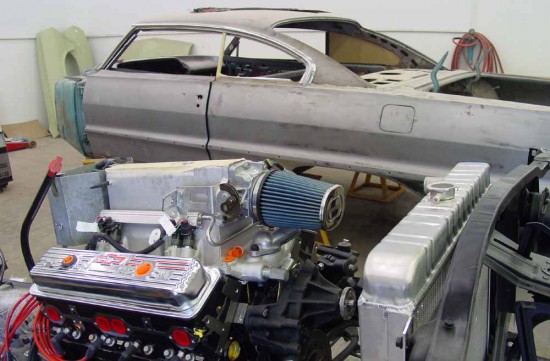 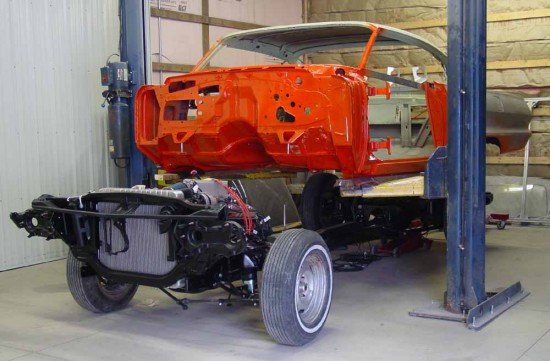